Rosekind Says Bus Operator Visibility Should be a Priority 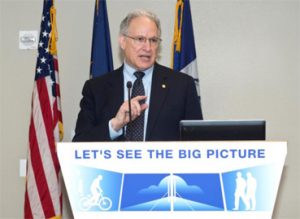 “Just getting to my hotel in Times Square from Penn Station was all the lesson I’ll need to know that driving in New York City can be a real challenge,” he said. “How can we make that challenge easier? One of the answers may well be improved vehicle designs that make it easier for drivers to see the world around them. We need to think both big and small when talking about vehicle design.”

The industry should also be looking to advanced technologies such as cameras and pedestrian crash avoidance mitigation systems, he added.

In 2016, NYC Transit is testing new safety technology on a small group of buses with the hopes of launching a larger pilot next year.

“The first is a collision avoidance system, which uses smart cameras to pro-actively warn bus operators audibly and visually in the event of a potential collision happening in the front or the sides of the bus,” according to a statement released by the MTA.

The second technology being implemented is a pedestrian turn-warning system. This device automatically alerts pedestrians audibly at a crosswalk when buses nearby are making right or left hand turns.

“Over the past two years, we have been able to decrease pedestrian and bicycle incidents involving buses by 16.4 percent,” said Thomas Prendergast, MTA chairman and CEO. “We need to do everything in our power to make sure that we not only hold on to the gains we’ve achieved, but that we continue to push to eliminate bus accidents altogether.”