Automotive glass company owner Troy Mason has a secret weapon in his training arsenal. He only brings it out once a year, but it’s among his most effective.

“We use the Auto Glass Week™ Auto Glass Technician competition as a tremendous tool with our technicians,” said Mason, owner of TechnaGlass, a multi-state chain based in Utah. “We hold our own internal competition and their prize is to compete at Auto Glass Week. It’s been a great incentive and it’s made all our techs strive to advance.” 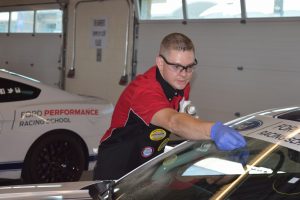 Out of 36 competitors, 18 in repair and 18 in replacement, two from Sandy, Utah-based TechnaGlass will represent the company at Auto Glass Week’s™ annual competitions October 5-7, 2016 in San Antonio, Texas. The TechnaGlass competition finals were held last week at Utah’s Motorsports Campus. The winners are Mitch Trujillo in the replacement competition and Jon Barney in the rock chip repair competition.

Trujillo is the Tooele, Utah, TechnaGlass store manager. He joined the company in 2007. 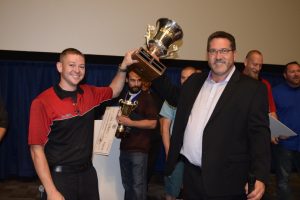 “This is the greatest company I’ve ever worked for,” said Trujillo upon winning. “I love hanging out at the various auto shops. I’m excited to win. I hoped to have the opportunity to compete at the national competition since becoming a technician.”

Brandon Tow, manager of the Grand Junction, Colo., franchise, grabbed the highest score for a newcomer to the replacement competition. 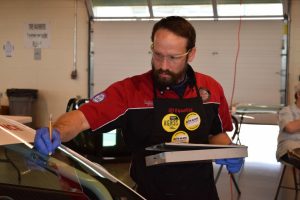 Barney, who won the repair competition, is the Pleasant Grove, Utah, store manager. He joined the company in 2010.

“The people I work with are a great group,” said Barney. “It’s amazing to win. I prepared by practicing customer interaction whenever I had time.”

Taking home second in the repair competition was April Sween, a customer service representative for the Draper, Utah, store. She also took home the award for highest scoring newcomer to the competition. 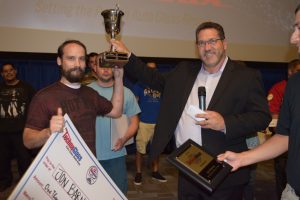 She spends quite a bit of time doing rock chip repairs and the technicians are teaching her how to cut out windshields, Sween said.

“I was a little bit nervous,” she said. “I really love it. I want to try and be an installer. I trained with Chris Lewis and practiced at home.”

Josh Wallo, a technician with the Orem, Utah, store was third in the repair competition. 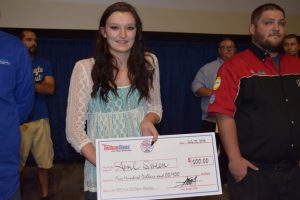 April Sween says she is the only woman doing rock chip repairs at the company.

Mason said: “I’m very proud of the competitors. For me, it’s the technicians that step up and compete that stand out. I really do view them as professionals who are continuing to want to improve. It’s not always about winning. It’s about learning. Every time you compete, you learn. As they prepare to learn, I want the entire shop to learn with them.”