General Motors (GM) is requesting a judge dismiss a recent lawsuit against the manufacturers that alleges the headlights on its 2014-2015 GMC Sierra 1500 and the 2015 GMC Sierra 2500 and 3500 are defective. 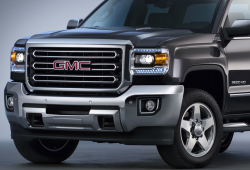 The lawsuit comes from plaintiffs Armando J. Becerra and Guillermo Ruela who claim the headlights are too dim, and that General Motors has been aware of the alleged headlight defect in the company’s trucks but has neglected telling customers about the problem.

According to the lawsuit, GM used three different bulbs for the headlights in the Sierra truck models before the 2014 model-year trucks: an H11LL bulb for low-beams, a 9005LL bulb for high-beams and a 5202 bulb for fog-lights.

Conversely, GM claims to have designed a new system requiring one 9012 halogen single-filament bulb for both low and high beams, whereas vehicle manufacturers have generally used dual-filament bulbs. The plaintiffs argue that the company used a moving shield to alternatively project a low- or high-beam from the 9012 bulb which can impair the driver’s vision at night, and despite numerous complaints about the 2014 Sierra headlights, GM continued to use the headlight design in the 2015 Sierra 1500 and the 2015 GMC 2500HD and 3500HD.

In response to the lawsuit, GM argues truck owners don’t contend the lights malfunction in any way, so the case should be dropped. According to the company, other lawsuits have been dismissed because of similar claims.

GM also adds that the plaintiffs haven’t shown any claims of injuries or accidents caused by the supposed defective headlights despite making arguments that the headlights produce insufficient light and will lead to accidents and fatalities.

The company also contests since the plaintiffs don’t accuse the automaker of making inaccurate statements regarding the brightness of the headlights, and there are no claims that GM intentionally sold the defected models.

GM told the judge that owners are upset because the headlights are manufactured differently—not because they are defective.