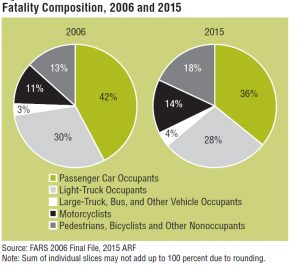 Traffic fatalities totaled 35,092 in 2015, a 7.2 percent increase from 2014, according to the final numbers released by the U.S. Department of Transportation’s National Highway Traffic Safety Administration (NHTSA). This number ends a five-decade trend of declining fatalities, according to NHTSA.

The largest increase previously was in 1966, when fatalities showed an 8.1-percent climb.

The total number of individuals injured grew to 2.44 million from 2.34 million, according to NHTSA.

Here is a breakdown of some of NHTSA’s findings:

• Van occupant fatalities were up by 95, a 9.3-percent increase.

“Solving this problem will take teamwork, so we’re issuing a call to action and asking researchers, safety experts, data scientists, and the public to analyze the fatality data and help find ways to prevent these tragedies,” says Anthony Foxx, U.S. Transportation Secretary.

A decade ago, traffic deaths were nearly 25 percent higher. A total of 42,708 fatalities were reported nationwide in 2005, according to NHTSA.

“The data tell us that people die when they drive drunk, distracted, or drowsy, or if they are speeding or unbuckled,” says Mark Rosekind, NHTSA administrator. “While there have been enormous improvements in many of these areas, we need to find new solutions to end traffic fatalities.”

For a full breakdown of NHTSA’s results, click here.