A Visit with the Admiral 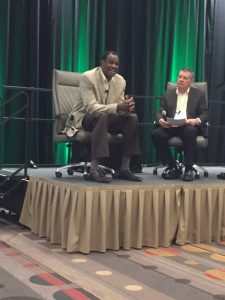 Former NBA All-Star David Robinson, also known as “the Admiral,” spoke to Auto Glass Week™ attendees yesterday on all things basketball and business. In a compelling question and answer seminar, Robinson shared some of his best memories on the court and the success he’s had with the Carver Academy, a charter school he founded in the San Antonio area.

The Carver Academy was founded to help children in low-income areas to achieve their educational goals. It’s also been one of Robinson’s most rewarding experiences, he said.

“All kids who’ve graduated from the Carver Academy have gone on either to a two-year college, or a four-year college, and that’s been very rewarding for me,” he says.

It wasn’t all serious talk, though. He also shared his favorite memories of playing with Michael Jordan on the Dream Team.

“Michael loves to bet. One time, we were at the airport, and he wanted to bet me $100 dollars that his luggage would come out before mine,” he says. “You better believe I didn’t take it because he probably paid someone to make sure his did.”

Auto Glass Week™ is being held this week at the Henry B. Gonzalez Convention Center and San Antonio Marriott Rivercenter in San Antonio. Stay tuned to glassBYTEs.com™