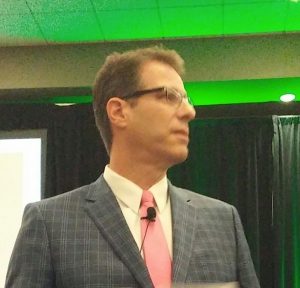 HSG CEO Wayne Sharrah offered some tips on what AGRR companies can do to avoid some of the pitfalls third-party claims administrators hear about from customers.

Wayne Sharrah, CEO of Insurance Claims Management, parent company to HSG/Code Blue, took center stage Thursday morning during Auto Glass Week 2016. In a room that had to be expanded to accommodate the packed crowd, he shared the insurance perspective and explained what AGRR companies can do to avoid some of the pitfalls third-party claims administrators hear about from customers.

Insurance companies pay out $43.5 billion a year to repair vehicles, according to Sharrah. Payments for glass claims make up a $2.5 to $3 billion piece of that pie.

“It’s a tremendous amount of claims,” he said. “There has been a 24-percent increase in insurance rates since 9/11. The cost of business and cost of glass has gone up. You guys need to help us understand what is going on in the AGRR industry. If you just learned something new [such as how to calibrate Advanced Driver Assistance Systems], you need to communicate this. Explain to insurers that you need to do these three things after the glass is installed. If this business is going to climb, they want to know.”

The glass industry represents a lot of buying power, Sharrah pointed out.

“I’ve been going to insurance companies to say we have to put reward guidelines back in for shops,” he said. “Based on cycle time, speed or repair rates, you should reward them [I tell the insurers].”

Insurance companies are thinking long-term. The industry needs to communicate with the companies about what is coming down the pipeline, he said.

“You guys need to help us understand what is going on,” Sharrah added. “Costs are what they are. To get a premium change, it takes 12 to 18 months. This is just the process to get a change approved. It is two years before insurers make any money back.”

While Sharrah noted that many AGRR companies do a good job, he says HSG does receive complaints. He pointed to these complaints as a learning tool for how some companies can improve.

“We get a lot of complaints at HSG about technicians who aren’t on time,” he said.

Citing an example, Sharrah said a customer reported that a technician was scheduled to come at a certain time. The customer said he called the AGRR company’s phone number to make sure someone was on the way. The appointment was scheduled for 3 p.m. The customer service representative told the customer the tech would be there by 4 p.m. When the tech had not arrived by that time, the customer called back for an update. The CSR told the customer the tech was running late and would be there within the hour. The customer had somewhere to be at that point and was upset but told the CSR he was willing to wait. He waited hours. When he called the company again, another CSR answered and explained that the tech thought the job was rescheduled for the next day and went home, Sharrah recalled.

Type in glass complaints on Yelp, Twitter, etc., and you’ll find hundreds of these,” Sharrah said. “If you’re not on time, apologize and commit to be there at a certain time. Otherwise the customer will be upset that the tech didn’t show up and no one called to tell him.”

Sharrah also advised that AGRR companies should return all calls.

“We’ve heard from a customer who said he called six times within a week and did not get a response,” he said. “The customer went to another company.”

Sharrah provided several tips to attendees, such as:

“If the first thing out of [the technician’s] mouth on a job is ‘dude’ … that’s not a good start,” Sharrah noted. “Most techs do a great job. They understand what needs to happen and communicate with the customer.”

Image is another important topic. There is an expectation of a professional image, he said.

“If a tech is smoking a cigarette and throwing it down on the customer’s property in plain sight, that isn’t good,” Sharrah said.

He also said that HSG has heard complaints about oil stains left on driveways from service vehicles. “Can you imagine with a smartphone what is going to happen? Click. They send a photo to us,” Sharrah said.

Business owners should set the standard, he advised.

“Customers have a vision as to how the person will look and how they will speak. I would encourage you guys to make an effort to insist upon a professional image,” Sharrah said.

So what does HSG do when it receives a complaint?

“We follow up with shop and let them know. We keep it away from the insurance company,” he said. “We hope it can be worked out. We really encourage you to call customer back to discuss the issue.”

He noted that insurance companies run industry surveys. HSG has data available down to the shop level on customer satisfaction, etc.

“We try to provide the feedback to shops as much as possible from customers,” Sharrah said.

Responding to an audience question about the insurance industry’s perception of NAGS, Sharrah said most insurance companies are frustrated by it because they don’t understand it. Pricing on the collision side is more understood since it comes from the original-equipment manufacturers.

“Our job is to work with you,” Sharrah said. “I’m out speaking with claims executives every day. We want to give work to you. To the extent you have problems with us … we want to know about it.”

Auto Glass Week concludes today in San Antonio. Stay tuned to glassBYTEs.com™ for the latest from the event.