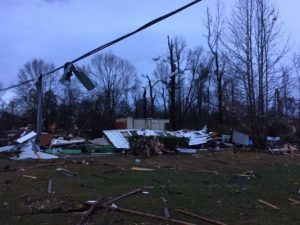 A series of tornadoes tore through Mississippi and Georgia over the weekend, killing 20 and causing widespread damage. PHOTO: Jason Munz

Communities in Mississippi and Georgia were reeling from weekend storms that ripped through the Deep South, leaving widespread damage that was still being assessed Monday.

As of Monday morning, a string of tornadoes had accounted for 20 deaths, most of which occurred in  a mobile home park in south Georgia — about 60 miles southeast of Albany — shearing away siding, upending homes and killing seven people.

The storms’ destruction was so widespread and severe that many people were still looking for survivors and assessing the severity of the damage.

The damage to vehicles was especially severe in Hattiesburg. Auto Glass City Glass is normally closed on the weekend, but was open both Saturday and Sunday due to an overwhelming demand for glass repair, said Jessie Nixon. Shop technicians are still trying to gauge damage and keep up with demand.

“We’ve seen a lot of totaled cars,” she said. “And we’re pricing about two to four pieces of glass per vehicle, but a lot of these cars have body work that needs to be done before we can get to them.”

In Georgia, residents are sifting through the wreckage of the second storm in two weeks.

“Two weeks ago we had a straight-line wind that caused a lot of damage,” said Randy Owens at Super Glass Windshield Repair.

Owens, who does repairs only, said he’s not getting a lot of calls for replacements but has been busy taking calls for chips and cracks repairs.

Larry Robinson at Albany Auto Glass said the tornado damage wasn’t as bad as the previous storm, but even so “there’s a lot of auto damage.”

Damage assessments by these shops are expected to continue throughout the week.