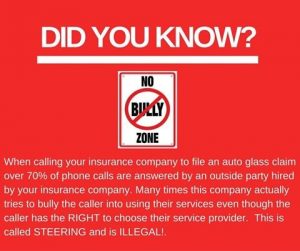 The Facebook ad designed and published by Auto One.

When a new staffer at a Michigan automotive glass shop recently became concerned at what she thought were efforts by insurance companies to “steer” customers, she decided to do something about it.

The result was a social media campaign designed to inform the public – and her own customers – about the options available to glass customers.

“I heard a great deal of discussion in the workplace concerning third parties and the potential steering taking place via phone calls with insurance companies,” said Amy Zoldowski, Auto One marketing representative in Brighton, Mich. Zoldwski recognized that, like herself, others could be unaware that some automotive glass claims are actually answered by a third party administrator (TPA) – perhaps even one that competes with her AGRR company. She said she felt others may learn from her new realization, and this knowledge could help consumers use their right to select a glass shop of their own choosing.

The issue is not confined to one store, or even one state. So-called “steering” of customers to a specific automotive glass shop by TPAs has been an issue in the industry for years – and even the target of some states’ legislation.

“Over the years, we’ve seen it happen, and it comes in waves,” said Jennifer Cannon of Century Glass in Columbia, S.C. “There are some scripts used by TPAs that are more aggressive than others and those can be intimidating.”

Some of those scripts read over the phone to customers filing claims can cause the customer to feel pressured or as if he or she has no choice but go with the shop offered by the TPA, she said.

In South Carolina, the practice gained the attention of the legislature, which passed House Bill 4042 to limit the practice.

Cannon said the bill was “anti-steering” but the version passed “doesn’t really have any teeth to it,” because the law is difficult to enforce. She said her best practice was “let the customer know that we are there for them, our warranty is guaranteed and that we will take care of them. We always let them know they have a right to choose.”

Zoldowski’s approach to informing customers of their right to choose was to create a Facebook ad used by Auto One.

“Having had discussions with community members about windshield repairs and replacements, we’ve found much of the public is unaware of the steering that tends to takes place during phone conversations with their insurance company,” she said. “This Facebook post was to help our local community realize that the person on the other end of the phone may actually not be part of the expected insurance company and just because someone on the phone suggests or pushes the consumer to use a particular company, it’s simply one of many options.”

Sharing this sort of information with her customers has left them “ … enlightened and surprised about  the inner workings of some insurance glass claim workings,” she said.  “It has been positively received.”

David Zoldowski, owner of Auto One – and Amy’s father-in-law, agreed.

“Auto One strives to educate the community around us to the need of ensuring windshields are both properly installed and undamaged,” he said. “Auto One hopes to help the communities around us to become more knowledgeable consumers who stand up for themselves and their right to choose the company installing their auto glass.”

This entry was posted in glassBYTEs Original Story and tagged Auto One, Century Glass, TPA. Bookmark the permalink.