Wet, Snowy Weather in West Slowing Down Some Businesses

The winter weather hitting the western United States this week has wreaked havoc on roads, bridge and communities in California and Nevada – and on the automotive glass businesses there. 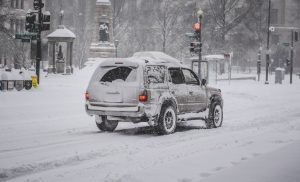 For about a week, California has been inundated by heavy rains that have caused widespread flooding and mudslides, while several feet of snow have buried the Sierra Nevada, according to The Weather Channel. The most recent round of snow in the Sierra has resulted in totals of up to 79 inches in the Lake Tahoe region during the 48 hours ending Wednesday morning. In all, more than 10 feet of snow has fallen in parts of the Tahoe region in the last seven days.

Those conditions have kept many people off the roads, and that has affected some local businesses, like Great Price Auto Glass in Carson City, Nev.

“It’s slower than usual, a lot slower,” said owner Rami Zaraga. “We got people who are scared of driving on these roads, and I don’t blame them. We have some emergencies, people that need the work done right away, but we have a lot of people that are just staying home.”

Zaraga said the Carson City received a hard rain on Tuesday, then temperatures dropped to below freezing, so Wednesday morning, conditions were “icy and slushy and pretty slippery.”

But others found themselves with plenty of work to around.

Ronald Lupo, owner of Lupo’s Auto Glass n More, Carson City, said “The water makes it harder to do, but I’m getting more business. I’m a small shop with a large area to cover, so I’m definitely getting business.”

The flooding hasn’t affected him much, he said, but the heavy rain has, and he expects his business to increase greatly due to nearby snowstorms.

“I’ve got some leakers – some OE windows that need fixing,” he said January 11. “I’m near Lake Tahoe so I’m going to get a lot of business from ice, a lot of chipped glass due to the ice.”

In Reno, Shawn, manager at Auto Glass Now in Reno, said this year’s weather is really no different from years past.

Typically, he said, business slows down during the storm, then picks up afterward, when people are able to get back on the road.

“The roads are terrible and nobody wants to get on them, but we’re getting lots of calls to schedule glass work for next week,” he said.

In northern California, shops are dealing with rain – lots of it. And it has definitely slowed the pace of operations for some.

“It’s definitely affecting our business,” said Victoria Vasquez of Sacramento Auto Glass and Mirror. “There’s a lot of flooding in the area. A lot of people are calling asking for mobile installations because they don’t want to get out and drive on these roads, but we don’t do mobile installations in the rain. So if they don’t have a shop or a shelter, we lose that business because of the rain.”

Nick Mezin, manager at All Star Glass in Sacramento, agreed with Vasquez’s assessment.

“Rain always slows us down, because people don’t have garages to put the car in, and we can’t do it in the rain,” he said.

Even so, he seemed to remain philosophical about the weather.

“We haven’t had anything out of the ordinary,” he said. “This happens every year when it rains.”

This entry was posted in glassBYTEs Original Story and tagged weather. Bookmark the permalink.