Hyundai is facing a statewide class-action lawsuit, if the plaintiffs are granted certification in the 2015 case surrounding the automaker’s alleged defective panoramic sunroofs.

In 2015, Billy Glenn, an Alabama resident, filed a lawsuit against the company for allegedly knowing and selling certain makes and models with defective panoramic sunroofs. According to the original complaint, Glenn’s 2014 Santa Fe Sport’s sunroof shattered without cause, only to experience the same incident with its replacement. 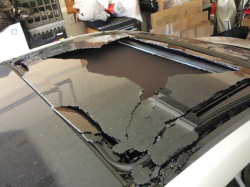 Most of the lawsuit was dismissed in late July 2016, but the presiding judge allowed the plaintiffs to move forward with claims of fraud, with the ability to amend the complaint to include violations of consumer protections laws and unjust enrichment.