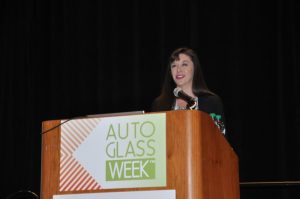 The trend toward vehicles with advanced driver-assistance systems (ADAS) is considered undeniable by many in the industry. At Auto Glass Week™, NSG Pilkington North America marketing specialist Erica Clouse looked at current changing trends and possible trends in the future.

“Change is driven by a desire for more complexity,” said Clouse. “If you look at a 1952 Desoto, you’ll see a split and raked windshield that gives the illusion of curvature. Now windshield complexity is far beyond curvature.”

According to Clouse, the biggest driver of change is safety. However, the increase in vehicles with ADAS makes auto glass more complex. 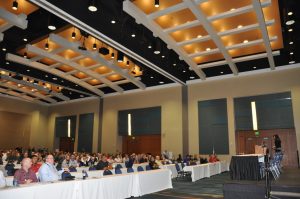 ADAS cameras are being mounted on windshields because the glass is cleaned more often and the cameras are better protected than when mounted elsewhere.

“At Pilkington, we’re an OE glass manufacturer as well. I can tell you from our orders that everything in the next five to seven years is focused on ADAS. We’re in for a long ride with these and we need to learn how to adapt. This means a change in quality glass, installations and calibration,” said Clouse.

She emphasized that a working system can save lives, but a system failure can end in an accident or fatality.

“Without high-quality glass and light control, the light detection and ranging (LIDAR) systems could malfunction,” said Clouse. “High0quality glass with light control means the LIDAR won’t need to be calibrated.”

Glass that meets OE specs generally is required for successful calibration according to Clouse. It is made to the same specifications as OE glass, whereas aftermarket glass has wider specification ranges. Precision also plays a major part in ADAS calibration.

“Just being one degree off in your installation angle makes a huge difference,” said Clouse. “You may not like this, but setting blocks are your new best friend. You won’t have to worry about pressing too hard on one side and throwing off the calibration.”

“Consumers won’t be happy to hear this but the precision required makes 15-minute installs impossible. You have to pay attention to every windshield you put in,” said Clouse. “You need people who are willing to take the time to get out the tape measure and read the instructions for every vehicle.”

Not only does ADAS address safety, it is part of a growing trend toward automation.

Clouse used Columbus, Ohio’s smart city project as an example. Vehicle to infrastructure (V2I) and vehicle to vehicle (V2V) communication is one potential future trend that could affect the auto glass industry, according to Clouse.

Clouse explained that some concept cars get rid of mirrors altogether, relying on windshield mounted cameras to provide driver vision.

“The trend toward automation doesn’t mean people will all being buying fully automated vehicles any time soon. Too many people like to drive and they aren’t willing to give that up and shell out a bunch of money for an expensive car,” said Clouse.

Instead, she said that Pilkington predicts the increase in fully automated vehicles will trend toward taxi services.