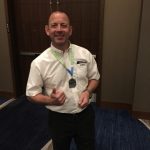 Abrahams and his colleague, Luke Allies, took part in the “large-size company” category at the international event. It was Abraham’s second time competing.

Both Abrahams and Allies were selected to represent Auto Windscreens after being named champions of the company’s internal “Clearly the Best” 2017 competition. Abrahams also is the reigning WorldSkills United Kingdom (UK) Master Fitter gold medallist.

“To be back once again at the competition was amazing and going one step further and taking second place was the icing on the cake,” says Abrahams. “We knew there would be some strong competitors but Luke and I thoroughly enjoyed the week, meeting other participants and demonstrating what the UK can do.”

Rupert Armitage, Auto Windscreens’ managing director, added, “We are all incredibly proud of Steve and Luke’s achievements at Auto Glass Week™ 2017. Both performed outstandingly under immense pressure and it’s absolutely incredible to see Steve take the top position for a UK competitor.”