Educating the Industry about NAGS

The National Auto Glass Specifications (NAGS) benchmark is a sensitive subject among the industry, something Mitchell International Inc. senior vice president of service and operations John Gilmartin addressed at Auto Glass Week™ as he explained how Mitchell is making improvements. 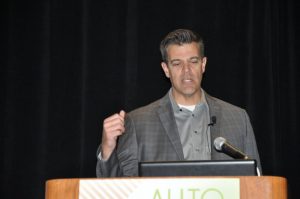 “We’re trying to help all parties by making sure we’re being as efficient as possible,” said Gilmartin. “The industry data we collect allows us to identify trends and patterns about retail acquisitions costs of glass parts. We’re looking at relativity to understand which way pricing is moving in general.”

Gilmartin explained that the company’s intent is to educate the industry about the purpose and usages of NAGS, which is published three times a year after data acquisition from suppliers.

“We don’t have all of the price information out there, but we have a large part of it,” said Gilmartin. “We then review, align and array all of that information.”

Mitchell reviews the data once it has been collected by getting rid of information with incorrect NAGS numbers, rather than guessing at what the number was supposed to be.

“We look at the average variable costs by part. We don’t include a geography index for the prices, but we apply formulas to create one price that factors in differences in geography and channels,” he said.

He clarified that no index can accurately manage the various intricacies of a market, but said the company is working to better its process because it’s important to ensure that the index is consistent.

“In September of last year, we saw a negative 4.1 percent change in the index. We looked at the process and asked ourselves if that was correct. We underwent a review and reissued the January 2017 NAGS benchmark with the September 2016 parts and pricing,” said Gilmartin. “We released the new index in May 2017 as planned.”

As for what’s next for NAGS, Gilmartin said that Mitchell plans to increase awareness of the automotive aftermarket glass industry, restate what the NAGS benchmark is and is not, seek additional sources of retail acquisition cost data and determine how to augment data.

4 Responses to Educating the Industry about NAGS