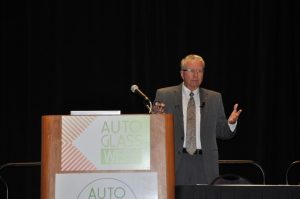 Allied Glass Experts president Henry Chamberlain addressed the causes of sunroof shattering and whether consumers should be concerned.

News of exploding sunroofs can often scare consumers. At Auto Glass Week™, Allied Glass Experts president Henry Chamberlain addressed the causes of sunroof shattering and said, “this is just one part of the conversation related to spontaneous tempered glass breakage.”

“You’ve all seen tempered glass fractures. The fracture releases compression surface stress which lets the glass expand. There’s tremendous force in expansion,” said Chamberlain. “When the force expands the glass, it breaks into fragments and you’ll hear a sound. This release of energy makes sure there are no large shards to hurt anyone.”

The causes of sunroof shattering vary from the presence of nickel sulfide to spontaneous breakage due to subsequent damage overtime.

Chamberlain warned attendees that whirl formation caused by nickel sulfide damage may not be a perfect hexagon. He also said that a pair of whirl fragment does not necessary indicate that nickel sulfide caused the break.

He looked at a study by the Korea Apparel Testing and Research Institute (KATRI) which researched the increase in exploding sunroof complaints between 2011 and 2013.

According to Chamberlain, the KATRI study did not address the fact that more vehicles now have larger sunroofs.

“I’m finding that the breakage rates are well within the normal range,” said Chamberlain. “But it’s a little more dramatic when the glass that breaks is over your head. So exploding sunroofs get a little more attention I assume.”

He had an important message for auto glass shops related to this issue.

1 Response to Explaining the Exploding Sunroof