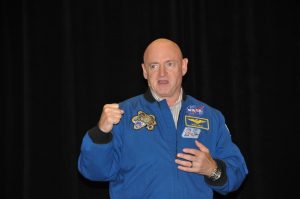 He spoke about some of the most defining moments of his career and weaved those lessons with the story of the assassination attempt on his wife, former Congresswoman Gabrielle Giffords, in 2011.

Kelly began by talking about the beginning of his U.S. Navy career.

“When I drove through the gate of the naval air station for the very first time, I had cheesy music from the movie ‘Top Gun’ playing on the tape deck. But I wasn’t Maverick. I wasn’t a very good pilot,” he said. “The Navy sends you to land on an aircraft carrier 50 miles off shore after your first year. I could barely land on a runway, let alone an aircraft carrier. It took me four times. During my debriefing, the first thing the instructor pilot said was, ‘Are you sure this career is for you?’”

Kelly drove home his point by saying that how good someone is at the beginning of anything they try is not a good indicator of how good they can become.

“I overcame a serious lack of aptitude with practice, persistence and just not giving up,” said Kelly. “All of life is a set of personal and professional challenges.”

Kelly told the story of when he flew into Iran airspace to avoid Iraqi missiles. He failed to communicate his plan with his team, and was almost shot down by friendly fire.

“What I learned is that there’s never an excuse not to communicate with the people you work with. Timely communication is important in everything you do. It nearly cost me my life not communicating,” said Kelly.

On January 8, 2011, his wife was shot in the head while meeting constituents outside of a grocery store near Tucson.

Her wound was critical and required multiple surgeries.

“I found out what it means to be a primary caregiver. It’s a tough place to be in,” said Kelly. “The doctors gave me two surgery options, and I wondered how they came to a conclusion that one was better than the other. We’ve learned a lot about decision-making at NASA. There was the Challenger accident in 1986 and the Columbia accident in 2003.

“We created a new decision management team after that. Everyone sat at the same level and everyone had access to a microphone so everyone could be heard. On the wall in the conference room it says, ‘None of us is as dumb as all of us.’ ‘Groupthink’ can set in and teams can make horrible decisions. Before Gabby’s surgery, I gathered the medical staff to get their opinion. At NASA I learned that if you want to learn anything you don’t ask the chief engineer first. So I asked a resident her opinion and we worked our way up.”

Kelly highlighted the necessity of reducing risk by paying attention to minor details.

“I told my team that they were required to question my decisions. Not out loud,” he said. “But if they thought we could do something different for safety or success I wanted them to tell me.”

He finished his speech by delivering a message from Giffords, “Be bold. Be courageous. Be your best.”

Audience members asked a few questions after the keynote. When asked about the future of the space program, Kelly responded, “It helps to have people interested in it. Voters need to call members of congress asking for more out of our space program.”

Auto Glass Week continues through Friday. Stay tuned to www.glassBYTEs.com™ for the latest from the event.