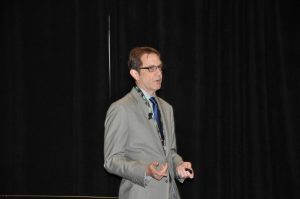 James Lynch of the Insurance Information Institute discussed how autonomous vehicles will affect the auto glass industry as it relates to insurance.

It was a packed house in the Auto Glass Week™ session regarding what’s changing in auto insurance. James Lynch, vice president, data and information services, and chief actuary for the Insurance Information Institute, discussed how autonomous vehicles will affect the auto glass industry as it relates to insurance.

Lynch began his presentation by pointing out that the first step in all these changes is the self-driving car. “But ultimately we, the driver, are still responsible for where the car goes,” said Lynch.

The next step is the driverless car and that’s what everyone is talking about. “But it’s not going to happen soon and that’s something we always have to emphasize,” he added.

It will be 2040 or 2050 before most vehicles have these driverless car features. Lynch said if there was a government mandate it could happen faster.

“When they [the government] tells you to do something it happens faster than when it is not mandated,” he said.

But no matter when these vehicles become mainstream, he shared a recent consumer study stating that only 59 percent of consumers said they would be willing to drive (or be driven) in a driverless car. He pointed out, however, that the number is trending downward as awareness rises. He likened it to the safety of airplanes, yet people still have a fear of flying. “That applies here as well,” he said.

What’s the impact of all this on the insurance industry? “Everything points to claims increasing so your business has to adapt to that,” said Lynch.

“A product liability claim can take five to twenty years,” he said. “And I guarantee you when a driverless Mercedes hit a driverless Volvo there will be a fight and that can change the way insurance gets sold.

“Auto glass dealers will be pulled into these product liability lawsuits,” said Lynch. “The costs will go up. I wonder if you all are thinking of that.”

While yes, there are serious challenges ahead as everyone in the auto industry adapts to a future with driverless cars, Lynch had a positive message.

“As business owners, you know that change is always happening,” he said. “You have to have your eyes open but you can withstand this.”