For four days, SEMA brings together the latest and most exciting innovations within the automotive industry. Although not heavily focused on glass, the 2017 SEMA Show did touch on some topics of important to the glass industry. 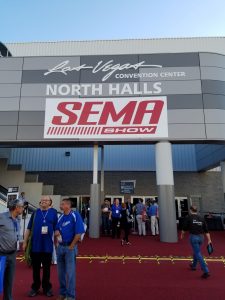 “[ADAS] is driven by interest and demand for increased safety. It includes a lot of stuff you guys are familiar with, stuff like blind spot monitoring, lane change assistance and crash avoidance, as well as developing technologies that are just coming out,” said Chris Kersting, SEMA president. “While most of these products are available from car makers in some of the newer vehicles, there’s a terrific opportunity here for our automotive aftermarket. That’s about retrofitting the 260 million light-duty vehicles that are on the road today, many of them waiting to be retrofitted with these systems and take advantage of the safety and convenience that they offer.”

SEMA released the study during its show. It gives industry specifics on market potential for ADAS.

“The market is estimated to grow at about 9 percent annually over the next 5 years. We believe that potential for growth is even stronger,” said Kersting.

He described the retrofit market as being in its infancy, but hopes the study will help manufacturers as well as retail, service and repair providers to capture the potential for growth.

“We also have a new UV light. It’s a rapid-curing LED light that cures resin in 10-15 seconds. It’s really fast and really easy to use,” said Haarala.

“We’re showcasing the ZipKnife and our new JetPacks,” she said. “The JetPacks uses the same AirForce technology that we have in our Raptor, which is a cord and wire removal tool. AirForce technology eliminates pumping out of vacuum cups. So we’ve removed the plunger but have strong hold and long battery life.”