The 2017 Specialty Equipment Market Association (SEMA) Show wrapped up its four-day run at the Las Vegas Convention Center on November 3, and while the show is primarily focused on automotive restyling, a few companies from the auto glass industry made an appearance on the show floor.

“We’ve actually had a really good show this year,” said Ehgotz. “We showcased our new VistaClear Pro. It’s a windshield rain repellent, and we’ve had a lot of foot traffic, so [the show’s] been well worth it. Right now we’re selling [VistaClear Pro] to glass retailers and wholesalers who can get it out into the marketplace. There’s also some collision guys who are looking at it.” 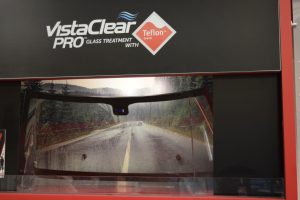 The Teflon-branded product is designed to protect a vehicle’s windshield from rain and road debris for up to 12 months following its application, according to the company. Carlex also demonstrated its OE Carlite side of its business, which featured the Ford-branded parts for the F-150s.

“Windshield repair has been our big hit this year,” said Gobin. “People have been really interested in our windshield repair bridges. We customize the color, so with this [show] being aftermarket, people have been really interested in going with the fuchsia or even doing a red or doing a yellow, so it’s been a pretty good turn out on that for us.”

The company also showcased one of its newest products, Derma Shield, a skin protectant barrier cream, which prevents chemicals, acids and paints from permeating into the skin, Gobin said. The Blue Man Group, prior to their performance at the show, applied the cream before putting on their signature blue paint, he added.

“The show is going very well. We’re really happy with the response to the tools and the flow, and there’s a lot of people around, so we’re happy,” said Don Rietze, operations manager, Extractor. “It starts a little slow in the mornings first thing, but no one likes to get up early. It builds; it’s been very good.” 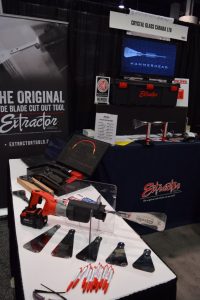 The company didn’t debut any new products due to time constraints, but Rietze touched on the two new extended blade sizes—an 8 inch and 10 inch—for the Extractor Pro Mini, which are set to be released in the near future.

“We think it’s going to work really well for some of the new sunroofs and moonroofs. But the tool, when we initially built it, was designed for removing quarter windows and mid windows—the side windows where you don’t have much room.” Rietze explained. “And though wire removal tools will work in some instances, nothing works for everything. You really need to have a range of tools.”

Pilkington Classics focused on its restoration-side of the business by highlighting its colored glass as well as its flush mount glass. 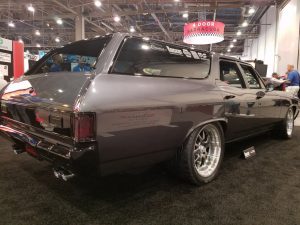 “Having the Luce Customs ’72 Chevelle four-door station wagon is really bringing in a lot of the crowd,” said Mike Monarrez, operations and sales manager, Pilkington North America. “We’ve had a lot of interest, not only in the car, but in the glass as well. This year we came up with new technology, new glass … In the booth we have gold glass, the back-glass for the first generation Camaro, and it’s generating a lot of interest as well.”

Monarrez said while the colored glass was certainly an attention-grabber, the demand for flush mount glass from consumers is increasing. The company partnered with Arizona-based Fesler, an automotive builder, customizer and parts manufacturer, to eliminate the trim and make the glass bigger to fit the opening flush with the frame.

“It makes the [the car] look much more modern, and it gives more of a pro-torque look to the car,” he said. “Everybody wants flush mount for their cars right now; everybody wants to get rid of the trim around it.”

Monarrez said the company offers about five different models through Fesler currently, but he says there’s more in the works.