A woman is accused of stealing more than $100,000 from the bank account of an auto glass shop in North Dakota where she worked. In July, Tri-County Glass owner Billie Lynn filed a police report with the Williston Police Department against Misty Flory, the office manager at Tri-County for the past 17 years. 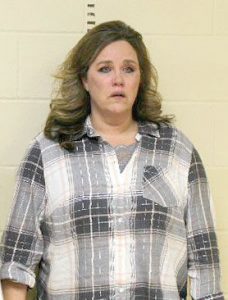 According to the report, Flory was authorized to use and sign checks for the business’ two bank accounts. Lynn told police that he got a call from American State Bank about a check written on May 31, 2017 that was not endorsed properly.

Lynn reviewed the Tri-County Glass check log often, but it was rare for him to review copies of actual checks received by the bank. According to the report, the check was written to Bank of the West for $1,780. It was signed by Flory. Lynn told police that the check log showed that it was written to NW Glass.

“Lynn and [Karie] Hatter, [the company’s secretary], started going through some of the recent logs and estimated that there was $10,000 to $13,000 missing from each month from unauthorized checks and cash withdrawals,” reads the report.

One check was written to a cable provider that neither Tri-County Glass nor Lynn have an account with.

Lynn told police that he believed Flory was paying her bills with the business’ checks. Lynn was in contact with a private forensic auditor to review his books.

Flory was fired in July according to the Williston Herald.

The local newspaper reported that an investigation into the business’ financial records from the past three years showed that about $106,000 had been transferred into three of Flory’s bank accounts from Tri-County Glass.

Flory was arrested on Thursday and charged with theft of property. She could face up to 20 years in prison if convicted.