John “Jack” Morris III, the man behind Tenn.-based Jack Morris Auto Glass, passed away on Friday at the age of 87. Morris was known throughout his hometown as a civic leader and businessman, always putting the happiness of those around him first. 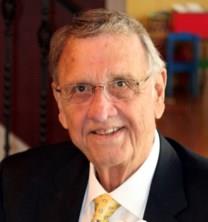 “Oh, you’re going to Jack Morris Auto Glass? They’ll treat you right,” a taxi driver told Tara Taffera, editorial director of AGRR magazine, when she visited the Memphis-based shop in 1999, the year after Morris decided to lessen his role in the company after a successful 42-year run.

Morris got involved in the business by way of his wife’s stepfather, who had started the company with two other men in 1951. Five years after the company was formed, one partner left and Morris was asked to come on board. He agreed to work with the company for one year to see if he was the right person to take over as president.

Evidently, he was. At the end of the year, he bought 50 percent of the business, and eventually became the sole-owner in 1970 after his wife’s stepfather passed away. Four years later, he changed the name to Jack Morris Auto Glass.

Today, the company is run by his two sons, John and Paul. Since 1999, the company has expanded from four locations throughout Tennessee to nine in present-day, including one location in Kentucky. And though Jack retired some 20 years ago, his mantra of keeping the customer happy carried on, as evident by the company’s nearly 100-percent customer referral-based business model.

But Jack, as well as his successors, weren’t just customer-centric. While that continues to play a major role in the company’s success, both of the Morris men believed to achieve a happy customer, it starts with happy employees.

“They could be in a good mood or bad, but they treat us exactly the same,” Jack Maharry, a company installer, told Taffera during her ’99 visit. “They are the best people I’ve ever worked for.”

But Jack Morris’ tenacious spirit resonated beyond the doors of his shop. Those who knew him in the auto glass industry say he was the epitome of a leader.

“I served on the NGDA [National Glass Dealers Association] and NGA [National Glass Association] board from 1972 to 1986, so I had the pleasure of serving under a number of presidents in the early times of our association,” said Dennis Clark, president of Lafayette Glass Co. in Lafayette, Ind. “Jack was, in my opinion, a real leader … I have been in the glass business since 1959, and Jack is one of the best people in the auto glass business that I have known.”

Morris’ legacy also carries on outside of the auto glass industry. He held several civic positions in his community, including serving a term in the Tennessee House of Representatives in the 1960s. He also served terms as the chairperson of Memphis Light, Gas and Water and the Greater Memphis Chamber.

“He will leave a major hole because he covered so many fronts in the things he did,” said Bill Morris, a friend of Jack’s with no familial relation, told CommercialAppeal.com, a local news source. “I greatly admired him.”

Bill went on to tell the local news source a story that embodied the kind of friend Morris was. “About 49 years ago, then-Shelby County Sheriff Bill Morris called his friend Jack Morris—whom people often confused for his brother—and asked him for a favor.

“Pull a car up to the street corner outside the county jail in about 15 minutes.

“With no other details, Jack Morris obliged. Right on schedule, he parked the car, and out walked the sheriff—handcuffed to James Earl Ray, the man who had just plead guilty to killing Martin Luther King Jr. a year earlier in Memphis.

“‘Jack was incredibly surprised,’ Bill Morris said, explaining how he put Ray in the back of his friend’s car, along with another deputy, and they drove away from the city undetected to deliver Ray to a state prison,” the article states.