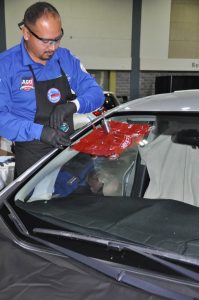 Calva competes in the WRO competition in 2017.

Small business owners know that promotion is one of the major keys to success. Promote any awards, achievements or certifications in all your marketing channels so your potential customers know you are focused on constant improvement and success. Alfredo Calva of Alfredo’s Auto Glass in Corona, Calif., has competed in the Windshield Repair Competition where he took home a silver medal, and after four years of competing in the Auto Glass Technician Competition he took gold in 2016. He used these wins in his marketing methods and say they paid off in major ways.

Calva has a YouTube Channel where he posts videos and promotes his wins here as well as in other social media platforms and on his website. He says it definitely makes a difference.

“I will be working on someone’s car and they will say ‘I can’t believe I have the World’s Best Technician working on my car,” he says. ‘Then some add, “You were the World’s best before the win also.’”

When asked if this helps him get jobs over his competitors he says definitively yes, but adds that it’s the whole package that is important.

“Our customers know we are all AGSC certified and it all comes together,” says Calva.

He adds that all those years of competing has definitely made him a better technician, and encourages others to get involved as well. And if you do, don’t forget to promote your successes.

This entry was posted in glassBYTEs Original Story and tagged Alfredo Calva, YouTube. Bookmark the permalink.