The powerful nor’easter that raked the East Coast over the weekend killed eight people and left 2 million without power across 17 states and the District of Columbia, leaving many auto glass repair and replacement companies unable to access their phone lines.

“The storm hit everyone as a surprise with timing and intensity and caught a lot of people on the road in poor conditions and high winds,” says Ben Weaver, general manager of Alderfer Glass Co. in Telford, Pa. “We were forced to close the afternoon of March 2, as we lost complete power and thus computers at our main Telford headquarter location.  We did re-open for a few hours without power on Saturday morning March 3, but were without power much of the weekend. As our phone systems and computers were down, our only contact with customers was via our cloud-based e-mail and social media. We have been very busy today and would expect to stay busy in the coming week with AGR business as we will have some backlog to work through.”

The company took to social media outlets to inform customers of the outage. 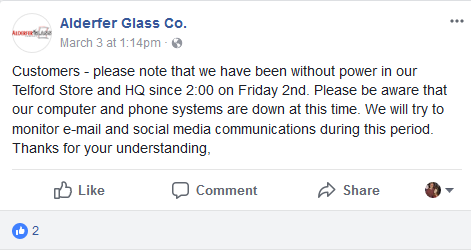 Weaver says he expects business to return to normal by next week, but he also anticipates a surge in business in the weeks that follow given the amount of damage the storm caused.

Winds gusted as high as 93 miles per hour at the peak of the storm, which spread destruction from Virginia to Maine. Those strong winds also knocked over thousands of trees, many of which destroyed cars and homes.

PGW Auto Glass in Westwood, Mass., was without power until almost 11 this morning. Ray Littlefield, lead warehouse manager, says the company was able to get their computer back up and running, but before then, it was complete chaos trying to control customer shipment orders.

“All the runs that were scheduled to run last night were a couple hours late,” Littlefield says. “It’s been chaos and mayhem because customers are waiting for windshields that haven’t been picked up yet. But we’re back on track for the overnight deliveries, and we hope to be business as usual from here on out.”

The warehouse even had help fly in from the company’s Ohio location to help get the facility back on track.

“It takes great teamwork to do this,” Littlefield adds. “We’ve got nine or ten guys, and we’re working together as a team to pull this off.”

Peter Brown, owner of Tiny & Sons Auto Glass in Pembroke, Mass., says his company also lost power. Plymouth County, home to Pembroke, still has more than 20,000 customers without power. Tiny and Sons, however, got its power back this morning.

“We lost power at about 5 on Friday, and I’ve never seen so much damage—not since the blizzard of ’78,” Brown says. “A lot of cars got damaged, a lot of fallen trees and streets closures.”

Brown, who is very active in his community, also used his company’s Facebook page to help customers by updating it with the latest storm news and power outages.

“I’ll tell you, it’s amazing,” he says. “We had five or six communities that had no power. A lot of us had generators or were charging our phones in our cars. Through social media, the community came together to make sure everyone was okay.”

Brown says his suppliers were all back online by 11 o’clock this morning, and that any car that could be driven to his shop today would be able to be serviced.

“There’s a lot of totaled vehicles,” he explains. “So much damage that a lot of cars have to go to body shops to get them repaired.”

According to NBC News, 224,000 homes and businesses are still without power in Connecticut, Delaware, Maine, Massachusetts, New Jersey, New York, Pennsylvania and Virginia.

Many calls to auto glass repair shops in those areas were left unanswered.