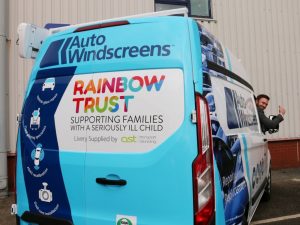 United Kingdom-based Auto Windscreens is featuring Rainbow Trust Children’s Charity on 14 of its vans in an effort to heighten the charity’s exposure.

Rainbow Trust, based in Leatherhead, Surrey, United Kingdom, is a charity that enables families who have a child with a life-threatening illness to make the most of their time together by pairing families with an expert family support worker, who helps them at home, in hospital and in the community.

The charity relies almost entirely on voluntary donations and helps more than 2,300 families through its eight care teams across England, including Swindon, Essex, West London, Lancaster, Greater Manchester, Southampton and Sunderland, which are among the locations where the new Auto Windscreens vans can be seen.

The new livery, which was produced by transport branding specialists, Ast Transport Branding, now features the Rainbow Trust logo on the back of the vehicles and was displayed at the 2018 Commercial Vehicle Show at Birmingham’s NEC Centre in April.

“Rainbow Trust is a really worthy cause and we feel passionately about supporting it through our national mobile glass repair network,” says Rupert Armitage, managing director at Auto Windscreens. “Our vans look great and provide an obvious means to showcase the charity. Any drivers following one of them will be sure to notice the colorful charity logo.”

Oonagh Goodman, director of fundraising and marketing at Rainbow Trust, adds, “We are very grateful that Auto Windscreens have provided such a fantastic opportunity to help us spread awareness about the vital support we offer to families with a seriously ill child to help them to make the most of precious time together.”