Hundreds of auto glass professionals came and participated in the first auto glass seminar Friday morning at Auto Glass Week™ in San Antonio. It focused on trends in insurance glass claims and was presented by Kay Wakeman, a research analyst for the Highway Loss Data Institute. 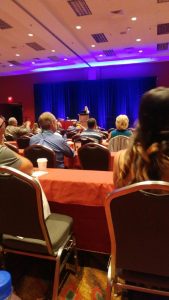 Industry professional sit in on the “Trends in Auto Glass Insurance Claims” seminar.

Overall, the institute has seen an increase in luxury car windshield replacements versus windshield repairs. According to Wakeman, there are a few contributing factors that could be concluded from the institute’s research. Two main causes are the windshield angle and type of glass used.

“We want to dive into this a little more, especially with the increase in luxury vehicle replacements because the average cost to replace its glass is much higher than what is classified as a standard vehicle,” Wakeman said.

The institute conducted a study a few years ago at the Washington Auto show, and based off of its results, they saw a dramatic difference in some vehicle model glass angles.

“After we began our research we saw some models of Jeeps with windshield angles over 63 percent. Meanwhile, the smallest vehicle angle found in more compact Hondas was only slightly above 23 percent. That difference is drastic,” Wakeman said.

Though there isn’t as much data available on what has been classified as extreme windshields (more than 50-degree angles), research and statistics has proven they provide a higher degree of frequency for their claims.

Windshields aren’t the only cause for the increase in insurance auto glass claims. According to the research shown in the presentation, panoramic roofs are also contributors.

“There’s an increase of glass on the vehicles when you factor in panoramic roofs, which increases the chance of breakage and the need for replacement,” Wakeman said.

Based on data on select Kia vehicles, there was a 40-percent loss overall for vehicles with panoramic roofs. 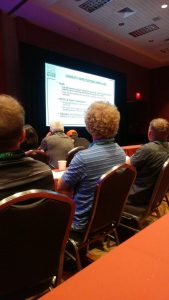 AGW guests take a look at some of the legal issues facing the auto glass industry.

The second session of the morning focused on how technology is expected to change aftermarket liability, and was presented by Richard Walawender, an attorney for Miller Canfield.

“I’m just a lawyer but it fascinates me when it comes to autonomous vehicles,” Walawender said.

It’s no surprise to those in the industry that there’s a shift in vehicle look and design – consumers want more auto glass.

“We’re getting to a point where people can get into their cars and not have to do anything except for getting in and relaxing as they get to their destination. Well, when people relax they’re going to want to catch more of the scenery and, therefore, the entirety of vehicles will change because there will be more glass needed overall in cars,” Walawender said.

According to his presentation on automated vehicles 101, the U.S. is behind the eight ball when compared to other parts of the world such as China.

“At first, when the idea for autonomous vehicles was on the table, [National Highway Traffic Safety Administration] (NHTSA) was not prepared to start regulating,” Walawender said.

He also spoke about his time at a conference in 2015 where most of the audience were of Chinese decent and were already planning advancements for their drivers.

“I was blown away. At first it’s terrifying to get into an autonomous vehicle, but then you start to see the benefits to it and the practicality in it, but then, as a lawyer you ask who will be liable if an accident were to occur,” he said.

Advancements in vehicle technology don’t always go smoothly from a legal standpoint. Based on the presentation there are several issues that include:

“Many are asking automotive lawyers why the owner of the car should pay for insurance when the owner doesn’t actually touch anything in the car,” Walawender said.

Questions like the one previously mentioned make the overall task of legal liability and representation that much more interesting, according to the presentation.

Auto Glass Week runs through Saturday at the Henry B. Gonzalez Convention Center in San Antonio. Stay tuned to glassBYTEs.com™ for the latest from the event.