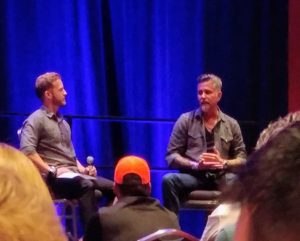 There was barely an open seat for Richard Rawlings’ keynote question and answer session.

Rawlings answered many questions from moderator Daniel Snow, manager of Glass.com®, and the audience. Rawlings started off by explaining how he transitioned from working in the industry to owning his own business. He started as a police officer, fireman and medic all before the age of 21. When Rawlings was 26 he walked out of the firehouse because he decided he wanted to do more and see the world. After spending his retirement funds on a Jeep, he transitioned into a printing company and eventually started Gas Monkey Garage.

Rawlings advises those looking to expand to start small. He left a comfortable job in his 20s, which for some would be a scary decision. He said to start with what you know you can handle. When he first started out, he only had a two-car garage and a used welder. Even though Rawlings had a little bit of money, starting small allowed him to establish a firm base before he eventually expanded into a larger garage.

Rawlings told the audience that establishing and sticking to a brand is key. He said that his employees may not always love his decisions, but they better love the brand. The brand is what continues to inspire them.

Flash forward to today, Rawlings has expanded to his widely popular “Fast N’ Loud” TV show. As soon as he started Gas Monkey, he started to look into expanding to a TV show. He even shot his own film, and asked several TV stations to consider him. Rawlings said he saw a gap in the TV market for a family-friendly car show.

“Were still tattooed guys, but instead of a pit bull on a chain I have a poodle,” joked Rawlings about his TV show.

This TV show has cracked open a new market for Rawlings. Not only has it opened him up to restaurants and retail, but he’s also having a lot of fun doing it.

“Fast N’ Loud” is in 20 different countries, and he said the sky is the limit for the future. TV wasn’t his dream, but it has allowed him to diversify and establish his brand. He joked that because of its firm base, he hopes Gas Monkey will be around much longer than him.

Rawlings tells the crowd, no matter what business is looking to expand, he always relies on and supports his employees. He takes a lot of pride in his brand, and knows that without his more than 1,000 employees, he wouldn’t be as successful as he is today.

Several audience members chimed in with questions, some joking and some serious, but what the audience realized is that Rawlings actually doesn’t know too much about the auto glass and tinting industries. Rawlings commented that glass is one of the only things they actually outsource for. This prompted excitement from the crowd who joked that maybe their business could extend to Rawlings.

One questioner asked Rawlings what he has found to be the best way to advertise. Rawlings said that what works now isn’t what worked 20 years ago. He has put a lot of emphasis on his social media campaigns. Rawlings even has a separate team set aside specifically for answering letters and social media questions.

He warned though that responding to negative comments is not necessary, and something he wishes he hadn’t done. He told the crowd to handle negative feedback from clients privately, but if someone is receiving negativity from an unknown source, it is best to leave that be.

Another question posed was how Rawlings runs his management team. He said that for his garage, a relaxed atmosphere is what works best for him. Obviously there needs to be structure, but he said that a loose atmosphere at the garage produces the best results.

Rawlings also commented that once his business really started growing, he had to rework some aspects of the structure. However, he has found his stride with his team, and they are more successful now than ever.

Between his growing business and many new opportunities, Rawlings was able to offer much advice, inspiration and some humor at Thursday’s keynote.

Stay tuned to glassBYTEs.com™ for the latest from the event.