The Sky Is the Limit for the Future of Automotive Glass 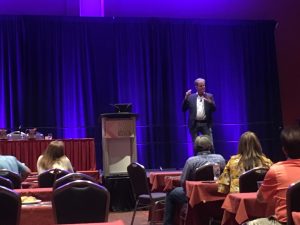 Robinson looked to the future of car design, predicting that cars will one day replace sheet metal with glass.

Robinson engaged the crowd with the possibility of the future. While it is easy to see what will happen in the afternoon, it is a little more difficult trying to see 20 or 30 years into the future.

Robinson informed the crowd that 1.34 million people are killed in car accidents every year.

“We have to stop. We cannot justify killing 1.34 million people with our cars. These are our cars, we create them,” said Robinson. He even started a campaign in 1996 to stop driving cars because of the mass casualties.

So what happens now? Robinson noted that designers are divided, but everyone agrees that something needs to change. Robinson stated that when it comes to auto glass, it’s especially time to change some rules, as it tends to be too old school.

Robinson stated that the future will see many autonomous cars. This is something he pushed for originally, and was ridiculed for, but today there is a demand for them. Autonomous cars will unlock endless possibilities for car designers, but this will not be the only change.

Robinson predicted that by 2040, cars that run on gasoline will be illegal, and there will be no more steering wheels or engines. As for glass, the future will see embedded image generation capabilities in cars. This is already widely available for TVs, but the future will see this in windshields as well, according to Robinson.

By 2050, he expects to see what he called the three zeros: no emission congestion, no accidents and no traffic. He believes that autonomous cars will be run so efficiently, that even stoplights will be eliminated.

These changes will allow vehicles will “morph” into personalized shapes. Customers will be able to customize cars specifically to their design wishes, said Robinson.

Future car designs will be seen as “eye candy.” Robinson even expects glass to take the place of sheet metal on cars.

“Where are the cut lines? How do you get in or get out,” asked Robinson concerning glass body designs. “Well, that’s the fun part.”

Auto glass will also be completely different in the future. Robinson predicts there will be a desire for vehicles with the “helicopter effect.” This means glass covering every inch of the exterior of the car, allowing passengers to see outside from every angle. With the integration of embedded imaging into glass, passengers will be able to see whatever they want on the screens. There will even be the possibility of integrating two-way glass onto vehicles, where the passengers can see out, but it would appear to be colored glass from the outside, according to Robinson. With the possibility of surrounding automotive glass, he commented that there would need to be better UV protective glass.

When it comes to the future of auto glass replacement, Robinson said there needs to be an on-going discussion between designers and manufacturers. So far, it has been difficult for some manufacturers to produce Robinson’s futuristic designs, but he is hopeful that the future will see things such as digital adhesives that will make the manufacturers’ job easier.

The future of auto glass will be very different from what we know today, but as Robinson put it, it is going to be a lot more fun.

Auto Glass Week runs through Saturday at the Henry B. Gonzalez Convention Center in San Antonio. Stay tuned to glassBYTEs.com™ for the latest from the event.