Out of eight finalists, it came down to the last two to find out who would win the Ford F-150 given away during the International Window Film Conference and Tint-Off™ (WFCT) and Auto Glass Week™. The winner came on the seventh key, which was held by Rosemia Tiglao of Extreme Tint and Polish, in Santa Clara, Calif.

Overwhelmed by the win and jumping with excitement, Tiglao praised God for her win. She was overjoyed and in disbelief that she won. Her husband, Rest, and daughter, Vess Jimenez, competed in the Tint-Offs™, as well as attended the show.

Every two hours on the WFCT and Auto Glass Week trade show floor during show hours an attendee name was announced as a finalist for the truck. Names were being drawn approximately two hours apart starting on Thursday around 3:00 p.m. In order to collect the key, the finalist had to be present on the show floor.

On Saturday, September 29, at 1:30 p.m., each finalist (or their representative) gathered to see if his or her key fit the locked box containing the truck keyfob. 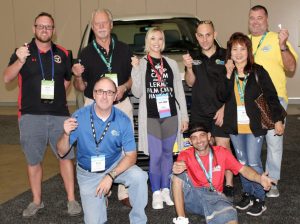 The eight finalists included Tiglao and:

WFCT and Auto Glass Week were held September 27-29 at the Henry B. Gonzalez Convention Center in San Antonio, Texas.