Last month one industry family got news no one ever wants to hear – that a loved one has been involved in an accident and did not make it. glassBYTEs brought you the story of husband, father, and son Harry Raymond Guthmiller III’s (Ray) tragic death from an ATV accident just before Thanksgiving. Now we’re giving you an update on fundraising efforts for his family 30 days later. 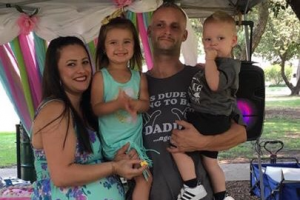 Originally Guthmiller’s GofundMe page had a goal of raising $15,000 for his young family after his passing to help with expenses. Since the page’s first day there have been a sea of supportive comments from those both in and out of the auto glass industry who spoke highly of Guthmiller. The page has raised $15,785 after just one month and has surpassed its initial goal.

“We got contributions from all across the county for his family on the GofundMe site and I couldn’t be more pleased with about our progress and what it means for his family,” Steve Mort, Don’s Mobile Glass CEO, said.

Mort was Guthmiller’s employer before his fatal accident and is still working to ensure Guthmiller’s family is doing as well as can be expected.

According to the family’s GofundMe page, Guthmiller was 34 years old and had been working in the auto glass industry at Don’s Mobile Glass in Modesto Calif., for just over a year. He is survived by his wife, Yvonne Guthmiller, and his three children, Dalila Rose, 4, Jr, 18 months, and Jasmin Daisy, 1 month.

The accident happened while Guthmiller was driving an ATV and was hit by a driver going in the opposite direction, according to the Modesto Police Department’s spokesperson, Sharon Bear.

Industry members who still would like to contribute can do so on the family’s GofundMe page.