The Clairus Group Takes The Next Step Into The U.S. 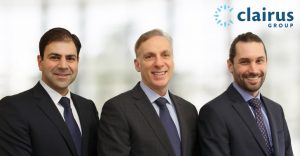 The Clairus Group announced the creation of its new team dedicated to North American mergers and acquisitions (M&A). The group will be led by Yves A. Sicard, who joined the company as the corporate development vice-president towards the end of 2018.

“Clairus Group has built an impressive foundation for growth, and this new M&A team, with Yves A. Sicard at the helm, is ready to accelerate the company’s North American development,” said Marc Desmarais, Clairus Group president and CEO.

Desmarais spoke to Tara Taffera, AGRR/glassBYTEs’ editorial director, about the company’s plans to enter into the states in the 2018 May/June issue of AGRR. During the interview he highlighted its strengths and potential concerns aiming to increase its overall presence in the United States.

Sicard is an attorney, holds an MBA, and has 20 years of transactional experience as an investment banking professional. In addition, he has a decade of executive experience.

Quickly after creating the new M&A team, the company acquired At Pac Auto Parts and its network of stores in Quebec, Ontario and the Maritimes, as well as its three warehouses in Quebec. This transaction was completed with the Dumas brothers’ support.

“The claims industry is in a state of flux. Consumer needs are evolving—now more than ever, they want advanced services, expert know-how and technological innovation. That’s where we come in. With our service platform, we can quickly and easily look at our customers’ needs and match them with the most qualified repair and claims management professionals,” said Desmarais.

1 Response to The Clairus Group Takes The Next Step Into The U.S.