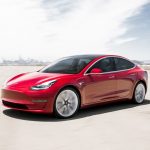 Consumer Reports (CR) published an article on its website yesterday saying it “can no longer recommend the newest Tesla—the Model 3electric sedan—because members say they’ve identified a number of problems with their cars, including issues with its body hardware, as well as paint and trim.”

Among the issues mentioned in the article that consumers complained about on the CR annual reliability survey were “glass defects, including cracks in the rear window.”

The author adds, “In fact, CR experienced similar problems with its own Model 3. Earlier this year, our test vehicle developed a large crack in its massive rear window during a cold spell when it was parked outside.”

Representatives from Tesla had not yet responded to requests for comment at press time.

This entry was posted in glassBYTEs Original Story and tagged consumer reports, Tesla 3. Bookmark the permalink.