Posted on May 13, 2019 by Tara Taffera
ttaffera@glass.com

Put a bunch of original equipment (OE) manufacturers and engineers in a room and tell them about all of the latest auto glass trends, including the use of more glass. How much glass, they ask? Think of a car as a glass bubble, some suggested. In the meantime, both presenters and attendees at the Automotive Glazing Conference in suburban Detroit discussed extreme challenges posed by this abundance of glass, such as how to handle increased solar heat gain and more. But the industry seems to have a variety of solutions among its new technologies. Nearly 80 from the OE community attended the session.

After a discussion of how ride sharing and autonomous vehicles are turning the industry on its ear, Dhiraj Uikey, glazing manager, SABIC, posed the question: How is this affecting glazing? 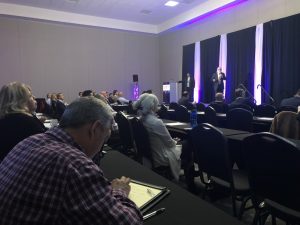 Attendees of Automotive Glazing USA learn about new technologies from a variety of leading experts today.

“As we go towards more autonomous and electric vehicles, ride sharing is becoming more lucrative and car manufacturers are coming out with large panoramic surfaces,” he said. “To feel safe, you want to be able to see out. It’s almost like a glass bubble is forming right now.”

But that amount of glass means more weight and this could be an issue with large panoramic roofs. With such an abundance of glass, what happens in the event of a rollover crash, he asked. And how do you manage and minimize the solar load coming into a vehicle, effectively cooling a car with that amount of glass? These were some of the questions Uikey posed, before opening the discussion to the audience.

One attendee suggested that an infrared reflective coating was the answer, admitting, however, that cost is a factor for that solution.

Joseph Harary, president and CEO of Research Frontiers, discussed applicable technologies in his session, including those licensed by his company.

He started by talking about Liquid Crystal, which offers good privacy but no shading. He then said electrochromic glass is great for small areas, such as rear view mirrors, but doesn’t work as well for sunroofs, where the technology could take 10-30 minutes to switch, and cannot be integrated with lightweight plastics.

With suspended particle devices, such as those offered by Research Frontiers, the switching speed is quick, he said.

“The light blocking capabilities are quite good,” he said. “With the touch of a button you control the tint of the glass.”

“This allows you to use more glass in a vehicle,” he added. “But with glass, now you can control the bad things. The glass can do the shading.”

Mercedes, Audi, BMW and Lincoln all use the technology, which has started making its way into electric vehicles as well, he said.

Chuck Butler, original equipment manufacturer (OEM) business development manager for Kuraray America Inc., talked about new technology from the perspective of an interlayer producer. The company has collected valuable statistics, he said, through data gathered from major auto shows over the past several years, some of which he shared from the U.S. market.

“The presence of a logo on the windshield has taken off even though these acoustic logos are not required,” he said. He also mentioned:

The company is taking that data, along with additional research, and testing for new solutions. Butler said the company is exploring “heatable” glazing that wouldn’t interfere with electric signals and that would be much less visible. The technology also wouldn’t introduce another polymer, he said, and would cover the entire visible area.

He also said there are issues with ceramic frit and cameras, and the company is working to develop a technology that would eliminate ceramic frit in that area. “It will still look like the old windshield, but will eliminate distortion,” he said.

He mentioned there is also a trend toward decreasing weight, which Kuraray is tackling first through door glass. Its SentryGlas acoustic product is going pursuing laminated sidelites in framed or frameless applications.

The event continues through tomorrow. Stay tuned to glassBYTEs.com for additional coverage of Automotive Glazing USA.