“I didn’t expect the auto glass industry to rally behind me and my family and support us, I’m thankful for each and every one of them,” said Jamie Bark, owner of Value Auto Glass in Hudson, Wis.

Bark and his family of four are grateful for all of the donations to the family’s GofundMe page following his ten year-old daughter’s spinal surgery. According to Bark, both he and his wife noticed their younger daughter Gabbie, was not meeting “certain milestones” when she was a one year-old.

“We noticed that she couldn’t stand up and to this day she hasn’t taken a step,” recalled Bark.

After noticing how Gabbie struggled to stand he and his wife, Jackie, took Gabbie to see a specialist. After a series of tests, the family learned their youngest daughter has a form of Muscular Dystrophy (MD), called Spinal Muscular Atrophy type two (SMA). But the medical news didn’t end there as Jackie was diagnosed with Multiple Sclerosis (MS) six years ago. Unfortunately her condition progressed into Progressive MS two years ago, according to Bark.

“Since learning about how my wife’s condition has progressed I have to physically lift Gabbie between 12 to 14 times each day just so she can be mobile and go to the restroom,” said Bark. 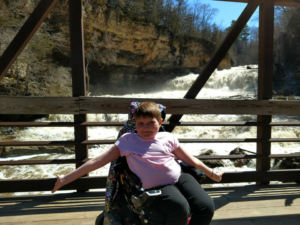 Gabbie recently underwent a complete spinal fusion, which her father said was to correct a 102 degree curve and twist in her spine.

“After she had the spinal fusion she grew about five inches overnight. At that point [when we got her home from the hospital], we thought she would be able to go back to school, but her at-home recovery took a lot longer than expected,” said Bark.

As a result of her extended recovery, Gabbie missed several weeks of school, and had to be cared for constantly. Although she has had a powered wheelchair since she was a toddler, she still needed help doing day-to-day things like getting ready in the mornings, bathing, and getting meals. It was at this point where Bark realized working full-time in his auto glass shop was no longer an option.

“We went down to one income after my wife’s diagnosis, but since I’ve been taking care of the both of them I haven’t been able to work in the shop as much. My day starts at about 7 a.m. and doesn’t usually end until 11 p.m. since I’ve started taking care of them full time,” said Bark.

According to Bark, he hasn’t taken a paycheck in months (since May) and has been maintaining caring for his family off of their savings.

The family has set up a GofundMe account in hopes of it assisting with their expenses. As of today, the family is more than half-way to their $8,500 goal in 12 days. Bark mentioned when school starts, in just over a month, he’s looking forward to getting back to work.

“It hasn’t been easy juggling work and my family’s needs. I went to the shop today just to get some paperwork and a customer has agreed to drop his truck off at my house. This way I can replace his windshield at night. As much as I enjoy working and taking care of my customers, I know I have to put my family first. Going forward I would love to have the funds to cover personal care assistance for Gabbie,” said Bark.

“I’m not sure what the future holds because the goal posts are always moving, but I’m grateful for those who have helped us. Throughout our journey we’ve learned a lot about MS and SMA, as well as having met people who are going through similar situations who help us to be strong,” Bark added.