Analysis: Sizing up a Shifting Market with Safelite’s Latest Acquisition

The U.S. auto glass repair and replacement market is increasingly concentrated in some respects but highly fragmented outside of a few major players. Those major players have, in recent years, overtaken large shares of the market through mergers and acquisitions. The largest major player—Safelite Group—recently made yet another big splash that shifts market share even further in its favor.

Safelite remains the far-and-away industry leader in terms of revenue and footprint, and it added to that footprint last week when it announced the acquisition of TruRoad. TruRoad is the parent company to JN Phillips Auto Glass, TechnaGlass, Windshield Centers, Carolina Windshield Centers, Harmon AutoGlass service brands and StrategicClaim software and services business unit.

The acquisition merges the industry’s top-two companies in an auto glass market that is otherwise made up of thousands and thousands of independent shops and multi-location national and regional businesses.

How They Got Here

Safelite took a significant share of the market in 1997 when it merged with Vistar, nearly doubling its annual revenue to approximately $800 million, as reported by Columbus Business First (1). That was short-lived, however, as Safelite filed for Chapter 11 bankruptcy (2) in 2000.

The company reorganized, and by 2007, it had 212 physical locations and 2,200 mobile service vehicles. That year, global glass service provider Belron acquired Safelite, merging its own U.S.-based business with Safelite’s brand as it expanded to more than 300 locations and 2,700 mobile service units. Safelite said at the time that it owned a market share of under 20% following the merge. According to the Columbus Dispatch (3), “The $334 million purchase increased Safelite’s revenue from $625 million to $760 million, with a goal of $800 million [in 2008].” Dan Wilson, then-Belron U.S. president and former chief executive of Safelite, was quoted in the Columbus Dispatch article stating, “Our next-closest competitor is about a quarter of our size.” [Another article cited later says its revenue was $500 million in 2008. This discrepancy may be due to one figure including or not including certain segments of Safelite Group, since the group consists of three main businesses.]

Safelite AutoGlass, the retail business, will be operating more than 800 locations and well over 7,000 mobile service vehicles—likely closer to 8,000—once TruRoad is under its umbrella. Safelite has made several other purchases of regional and multi-shop companies in recent years, including South Carolina-based Glasspro in early 2019.

Safelite’s revenue in 2017 was $1.6 billion, according to Profile Magazine (6), though it’s unclear exactly how much of that is generated from retail versus TPA services and distribution to other dealers. A majority is assumed to be from the Safelite AutoGlass retail segment, and it is estimated the TruRoad acquisition adds well over $100 million in retail revenues between JN Philips, Windshield Centers and TechnaGlass. 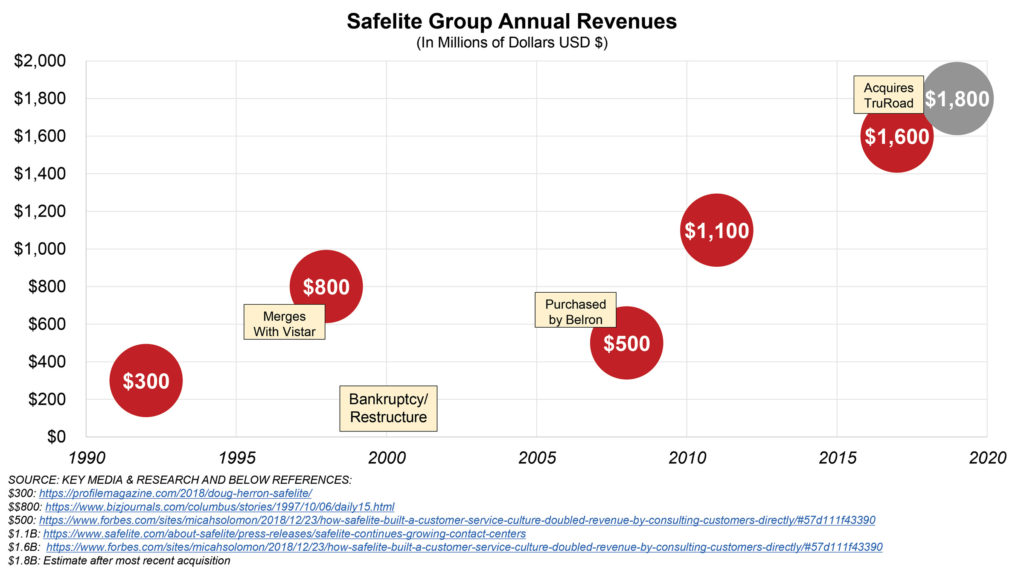 Click here for the full size of this chart.

Safelite held a one-fifth share of the market in the early-2000s, according to an article from Industry Today (7) dated year 2001. A press release from the company (8) dated year 2006 maintains the company’s market share remains below 20% after the Belron merger.

A Forbes article profiling Safelite CEO and president Tom Feeney states that from 2008 to 2012, the company “managed to double its revenue (from $500 million to over a billion).” (9)

Regardless, by 2019, Safelite has since more than tripled its annual revenue over the past decade and acquired a handful of major competitors along the way. Safelite’s revenue increased by more than 300% from 2007 to 2017. Per its website (11), the company currently says it services over 6 million customers a year, a number that was 2.3 million in the early 2000s, according to the Industry Today article. (When factoring in Safelite Solutions and Service AutoGlass, the company says in a recent release [12] it serves 10 million customers annually.)

Of course, this isn’t to claim Safelite’s market share increased by at least three times, as the size of the industry and market around the company has grown as well. But by how much? For context: miles driven and number of registered vehicles are two key indicators of volume of auto glass replacements in the U.S. During the same span Safelite tripled in size, the number of miles driven increased just over 6%, and the number of registered vehicles just over 10%. That only accounts for number of units, however, as the cost of glass replacement due to complexity and safety standards has increased as well, further ballooning the size of the market from a dollar value perspective.

Many estimates have windshield replacement demand at around 15 million (our demand estimates at KMR Research are a little higher when including all types of auto glass replacement). More conservative estimates are closer to 11 million, though we believe those numbers are from very outdated references. (An Industry Today [13] article about Safelite from the early 2000s references the 11.5-million estimate.) But no matter which way you slice it, Safelite could be performing at least a third of all auto glass work in an otherwise very fragmented industry.

The Rest of the Industry

Despite Safelite’s increasingly massive hold on market share, the backbone of the industry is still its thousands and thousands of small and medium-sized businesses throughout the country.

There are some other major players, most notably the Boyd Group, which includes Gerber Collision & Glass, Glass America and several other industry-affiliated businesses. The Boyd Group hasn’t been shy about acquisitions either, as it purchased majority ownership of Glass America in 2013 and has since been on a spree of acquiring collision shops throughout the U.S.

And according to AGRR Magazine’s 2018 Top Dealers list, there are at least five other companies with $25 million or more in annual sales, and a half-dozen others with at least $10 million in annual sales, all operating anywhere from five to a few-hundred locations. Some 50-plus other companies that made the list operate in the millions, most with multiple locations, while the overwhelming majority of establishments in the country are still small 1- to 5-man shops.