Collin Walton, of Don’s Mobile Glass in Merced, Calif., along with Jacques Navant, technical director, saw a need for a wire-out tool that would not damage or scratch a vehicle. They went to work and five-and-a-half years later the “frog” was born. Walton was recognized for his invention during Auto Glass Week (AGW) 2019 when he was presented with the Ingenuity Award, which recognizes technicians who create unique products that advance the industry. 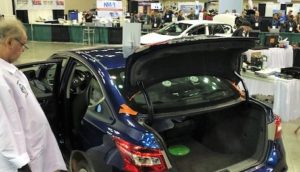 Judge Bob Beranek viewing the frog in action on the back glass and trunk of this vehicle.

The frog is a smooth operating tool for easy, safe and damage free removal. In fact, Walton placed third in 2018, and second this year while using the frog during the Auto Glass Technician Competition (AGTO). Walton, who competed in the AGTO, was honored with second place there and presented the Ingenuity Award.

There’s talk about getting the tool into distribution but Walton said they’re trying to find the best way to go about it. He is undoubtedly getting more interest, now that others saw it in action during AGW. He said watching it work makes a big difference.

“A lot of people see it’s a bigger frame but once they see it in action they are impressed,” said Walton. “It’s a lot faster, doesn’t slide across the glass, and doesn’t move. That is something that intrigues people.”

The duo also invented a companion for the frog, dubbed the “tadpole.”

“It’s a suction cup with a pulley on it to remove quarter glass. So it’s a smaller one to be used in conjunction with the frog,” he said.

Walton was surprised when presented the award, and was immediately overcome with emotion.

“When you put so much work and effort into something and get a lot of negativity from other techs who don’t want to move toward new styles and new methods it’s frustrating,” he said. “So to put in that much effort and get recognized it was really overwhelming.”