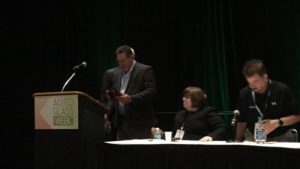 Today at Auto Glass Week™ 2019, Troy Mason of TechnaGlass was honored as the recipient of the tenth annual Carl F. Tompkins Award for Excellence in advancement of auto glass safety. The event is being held this week in Indianapolis. The award is presented by the Auto Glass Safety Council (AGSC) to the person who best exemplifies a commitment to industry advancement and safety.

Tompkins himself was in attendance to present the award to Mason, who cited him for uniting the industry and said, “Unity is more important today than ever.”

In 1991, Mason founded TechnaGlass in Utah and, in 1992, he opened his first brick and mortar store. Mason began growing his company and it expanded to 14 prime retail locations. In 1996 the company opened its first distribution warehouse and, in 1997, TechnaGlass opened two locations in one year. Since 2001, under Mason’s leadership, the company has opened an average of more than one new location every year. Over two million customers later, TechnaGlass has expanded into 12 states with 44 retail locations and annual sales of over $30 million. 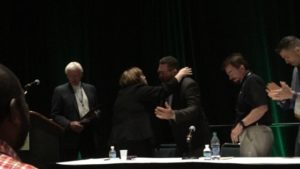 In 2017 he became president of the board of directors for the National Windshield Repair Association (now the Windshield Repair Division) with the goal of delivering real business value to all auto glass repair companies and promoting the value of repair.

“We honor him because of this foresight and actions to bring the repair and replacement industry back together,” said Tompkins.

“Think about where we have come as an industry,” said Mason when accepting the award. “A lot of it is due to Mr. Carl Tompkins, Deb [Levy] and the other leaders of AGSC. The AGSC has done wonders for this industry.”

“Thank you all,” he said. “This is very meaningful.”

Auto Glass Week™ continues through Friday. Stay tuned to glassbytes.com for more coverage from the event.