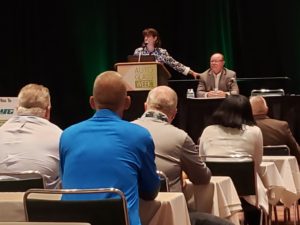 Day and Krause speak about the future of NAGS.

That opening statement came as a surprise to attendees who were expecting an update on last year’s announcement that NAGS was making changes to its methodology.

Day highlighted the expected technological advancements in vehicles and how that will impact insurance claims.

“Soon vehicles will be able to know it’s been in a collision before the insurance companies do. The additional sensors that will be incorporated are telling us this. It is our responsibility to get the information in everyone’s hands to keep everyone safe,” said Day.

Wayne Krause, director of National Auto Glass Specifications (NAGS), and Day introduced the Cloud system, which stores information in a digital format that can be accessed at any time, they said.

“We’re the only ones to use a cloud automated claims service. We’ve had the cloud for two years, and we’re proud of this achievement,” said Krause.

He mentioned that today’s consumers are well connected and want technology such as a cloud-based system.

“We’re in the cloud and our product is in the cloud. This is the first step to moving everything in the cloud. You don’t have to wait months to get it, it’s instant,” added Krause.

One of the things we hold near and dear is our integrity. That was something Krause mentioned several times when questioned with why NAGS was no longer going to change its methodology.

“After two years of consultation with the industry we will not be entering any changes into the NAGS benchmark pricing. There was a fear of disrupting the industry and that was something we did not intend on doing,” said Krause.