“We felt there was a pretty significant market and research hole in the North American auto glass industry,” says KMR director of research, Nick St. Denis. “Many of the market reports already out there include companies that aren’t even in the auto glass industry any more, or seem to not have a real understanding of the structure of the market in general. Given KMR’s industry expertise, we were able to approach this research project from the inside.”

KMR is the publisher of the auto glass industry’s magazine of record (AGRR™ magazine), the organizer of the largest annual auto glass event (Auto Glass Week™), and sister company/affiliate to several industry service providers and association. Given this, the company’s research division says it is best-equipped to provide the most comprehensive and accurate picture of the market. 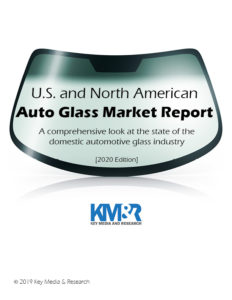 Below is an excerpt from the report’s Executive Summary, courtesy of KMR Research:

The auto glass manufacturing industry has undergone major shifts over the last decade, and seven manufacturers produce nearly all of the product on the North American market. The 2000s have also seen an influx of Asian influence on the region’s industry, with two key Chinese companies gaining significant market share.

Demand for OEM auto glass has increased steadily for much of the past decade but leveled out around 2015 and 2016. Demand for aftermarket replacement glass has edged up at a much slower but more consistent rate over the same period of time. Both are expected to increase moderately over the next few years, though at a more tepid pace than the immediate post-recession period.

The auto glass repair and replacement service segment continues to increase in overall value … due not only to an increase in demand, but also an increase in the value of glass and related services. One major player, Safelite Group, has grown exponentially over the past half-decade due to organic growth and a spree of acquisitions of national and regional competitors. Aside from Safelite and several other mid- to large-sized players, the overwhelming majority of the thousands of U.S. auto glass repair and replacement businesses are small, with employees in the single-digits.

Several key trends are impacting the replacement industry, including Advanced Driver Assistance Systems (ADAS) in modern vehicles, and the OEM industry, including the development of glass that implements new-age technologies. This comes at a time when retailers have voiced concern about the quality of glass on the aftermarket, prompting manufacturers to try and distinguish their replace­ment glass product as superior.

To purchase or for more information on the report, click here.