The four generations of family at Washington State’s Louis’ Auto Glass have gone through major changes and expansions since its first location opened in 1929, but this week they get to celebrate its 90th anniversary. Louis Adelstein, founded an auto parts business that also did glass work. He instilled a vision for his family that continues to bring success. The company now does residential projects that include windows and doors. Adelstein’s grandson and president, Rick, highlights various parts of his family’s 90 year-old and counting businesses and gives insight on what it’s like to work for and with the ones he loves most. 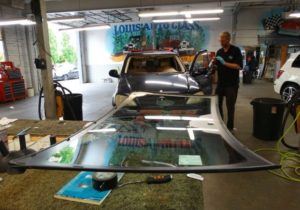 Inspecting the vehicle before installing the windshield

“He [my grandfather] started the company in 1929 under the name Louis Auto Parts & Glass. As you can see the name has changed a little bit … that was because we actually grew out of the auto parts business. I remember when the shop got too small for it, you know, for all of the parts needed like fenders and brakes,” he mentioned.

According to Adelstein, the company’s transition into doing mostly glass work started in the late 1940’s. “[Things had changed] but all of the glass back then was flat glass,” he said. Flat glass wasn’t only used on the residential side, as it was common to also see it installed in vehicles, as Adelstein recalled.

“Back in the late 1920’s and 1930’s it was all flat glass, can you believe it wasn’t even laminated back then? A lot of times back then door glass used flat glass too and it broke often, especially when someone would slam their doors,” he recalled.

Working for Your Family

“My father graduated in 1942, got drafted, and went to fight in World War II. In 1946 when my father came back he started going to the local college and he also worked for my grandfather. Now we have my three kids working for the business, it’s great just to be able to say that,” said Adelstein. 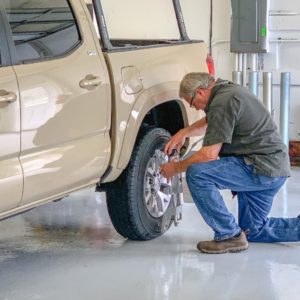 Since Adelstein grew up in the business it was natural for him and his brother to also work for the company following their grandfather’s passing. Now Adelstein admits to taking a backseat so his three children can have more control with the business.

Eldest daughter Carrie is the vice president and runs all three locations. A second daughter, Lindsey, works within the shops, her father mentioned she “helps the guys by taking the VIN numbers down and documenting the dates for their Sika products.” Ari, the youngest child and only son, is responsible for running the auto spa. The auto spa focuses on window film and has 12 employees. Adelstein mentioned his son enjoys creating seamless looks.

“We went from having a two-man shop to now having around 40 employees with three shops. The industry has grown rapidly and our community steered us into opening more locations based off of the need,” said Adelstein. 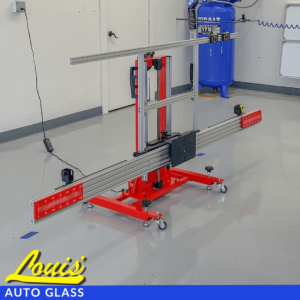 Some of the calibration machinery used at Louis’ Auto Glass

The second location opened in Lynden, Wash., in the late 1980’s and the family had a few reservations that centered on increased expenses and the fear of matching their first location’s success prior to opening day.

“The big challenge was if we can make the second location as successful as our first, everything is important well before you get into the logistics of doing an expansion … even down to the signs. I remember thinking we were instantly going to have more overhead and need to hire more employees, but we as a family figured it was worth a try,” Adelstein recalled. 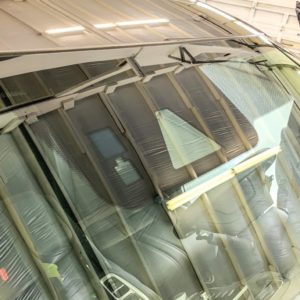 Almost finished with this installation and recalibration

Since the reservations were high, it was decided that the second location’s building wouldn’t be purchased right away.

“You always have that feeling of, well what if we don’t work out, that’s why we decided to rent the building we operated out of for the first 10 years just to be sure we’d be successful. We knew that renting is a lot easier to get out of [when compared to] buying a building,” said Adelstein, who mentioned the second location’s building was purchased years ago and is owned by the family.

After seeing achievements with a second location and learning a lot along the way, according to Adelstein, it wasn’t long before a third opened farther south in Mount Vernon, Wash. The same approach was followed with the third location, as the building was rented for a few years before it was purchased. All locations are modeled after the flagship store in Bellingham, Wash., and their customers all receive the same treatment regardless of the location they work with.

“Service is number one for us, you don’t stay around this long without it. And if you’ve got great service and employees you’ve got the makings of a successful business,” Adelstein said.