“It [the memorial square sign] was named about five years ago and this month we had a legislative walkthrough. So we had the speaker of the House and the Massachusetts state representative who was instrumental in getting that memorial square named. It was really incredible,” said Brown, as he recalled the event. 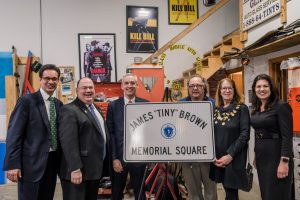 “She was the Senate president for almost 20 years. It was really good she was there because when my Dad won Business of the Year in 2011 from the Plymouth Chamber of Commerce she was the presenter, Brown said.

But having so many officials and community members in his shop became overwhelming at one point for Brown as he was reminded of how much his father was and still is loved and respected in the community. The sign is currently displayed in his waiting room along with being placed on the road.

“My Dad did so much in the background, I mean he was one of those people who helped everybody. He helped not only people in need but he was also always there for people’s rights, economic and business development,” said Brown. “He was one of those people you could always call for knowledge, recommendations, or support. He was just embedded in the community in such a way that he was recognized by the state for being such a big part of it and I’m just trying to follow in his footsteps.”

Although the sign bears the late founder, his son thinks it might not have been what he would’ve wanted.

“I remember when a state rep came to me and said they were going to name the corridor after my father and the first thing out of my mouth was ‘My father would never want that’ he was one of those people who loved to be in the background. But then I was told, it’s not about him, really it’s about what he stood for and how he was involved in the community,” Brown recalled.

Following in his father’s footsteps was something that naturally came for his son Peter, who continues living the way his father did.

“He left such a good legacy that it’s really hard for me to mess up, just as long as I do what he did and take care of the people around you, never hold your hand in your pocket – have it out to shake hands, look people in the eye, and help those in need,” Brown said.