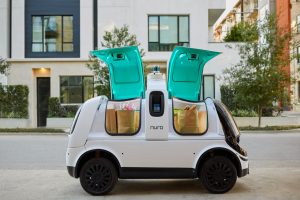 The Department of Transportation granted a petition this month to Nuro for a temporary exemption from three provisions of Federal Motor Vehicle Safety Standard (FMVSS) No. 500 for low-speed vehicles. The exemptions involve the vehicle’s glazing, as the vehicle, the R2X, does not have any occupants.

The vehicle that Nuro intends to manufacture under this exemption–the R2X–is a highly automated, electric, low-speed vehicle (LSV) that lacks seating positions and manual driving controls and is smaller, lower, and narrower than conventional vehicles, according to the announcement. The exemption applies to the requirements that an LSV be equipped with exterior and/or interior mirrors; have a windshield that complies with FMVSS No. 205, glazing materials; and a backup camera system that meets the requirement in FMVSS No. 111, rear visibility, limiting the length of time that a rearview image can remain displayed by the system after a vehicle’s transmission has been shifted out of reverse gear.

NHTSA has determined that an exemption from the requirement that LSVs be equipped with a windshield constructed from FMVSS No. 205- compliant glazing materials would not lower the safety of the R2X because a compliant windshield would not serve a safety-related purpose on an occupantless LSV operated by an ADS, due to the fact that a windshield is not necessary to assure (human) driver visibility, nor is it needed to protect occupants in a crash, according to the announcement in the Federal Register.

Click here for the full PDF notice including the rationale, comments received by DOT, including ones having to do with the windshield and glazing.

This entry was posted in glassBYTEs Original Story and tagged Department of Transportation, NHTSA, Nuro, R2X. Bookmark the permalink.