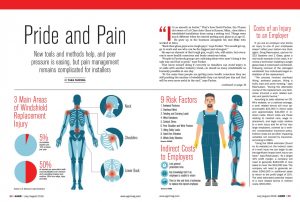 The accolades include a nomination for Auto Glass Repair and Replacement magazine (AGRR) in the general interest feature article category for editorial director Tara Taffera’s article on Pride and Pain.

“It’s wonderful that so many of our staff members recognized for their outstanding work,” said Debra Levy, publisher. “Having each of our four regularly scheduled titles recognized makes it even more special.”

KMR received additional nominations for its sister brands including: