Longtime glass industry veteran Roy Verne Van Buskirk of Champaign, Ill., passed away on April 21, 2020 at the Windsor of Savoy. He was 89 years old.

Van Buskirk was born on June 10, 1930 in Champaign, the son of Verne and Bernice Van Buskirk. He married Marilyn Goodell Van Buskirk in 1952 and had two children, Julie and Rodney. Marilyn died of cancer in 1997, and Van Buskirk later married Joyce Parkhill and then Phyllis Flynn, both of whom preceded him in death. 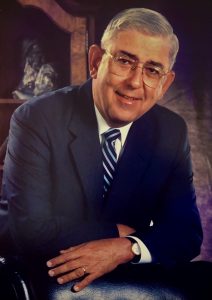 He is survived by his children, Julie (Stephen) Stock of San Diego and Rod (Donna) Van Buskirk of Champaign, as well as five grandchildren.

Van Buskirk joined the family business upon graduation from college and became president of Bacon and Van Buskirk Glass Co. Inc. from 1967-1997. He also founded and owned the Illini Pella Window Company from 1967 to 1996. Actively involved in his industry and community, he was a past president of the Glass Association of North America (then FGMA) and past chairperson of the National Glass Association. Van Buskirk was the only person to head up both of the U.S. glass industry trade associations.

Van Buskirk was a member of the First Presbyterian Church and earlier the First Methodist Church. He was on the Chamber of Commerce at the city and state levels as well as on the boards of Citizens Savings and Loan, Champaign National Bank and Main Street Bank & Trust. He was a long-time member and past president of the Champaign Country Club, a member of the Elks, the Moose Club and was an especially proud Kiwanian.

He loved flying and golfing, but his passion was being involved in the community and the associations and friendships he developed over a lifetime in his hometown of Champaign-Urbana.

Donations may be made in Roy Van Buskirk’s memory to the Cunningham Children’s Home and to The Kiwanis Children’s Fund. Sentiments may be expressed on the Morgan Funeral Home in Savoy website. Private graveside services will be held soon for the immediate family. A date for Van Buskirk’s celebration of life will be announced at a later time.

This entry was posted in glassBYTEs Headlines and tagged passed away, Roy Verne Van Buskirk. Bookmark the permalink.