Auto glass businesses have done just about everything to gain potential customer’s attention, and in Kerry Soat’s case wearing his company’s tee shirt was all it took to propel him into national television news. Soat is the CEO of Fas-Break Inc., which is located in Chandler, Ariz. 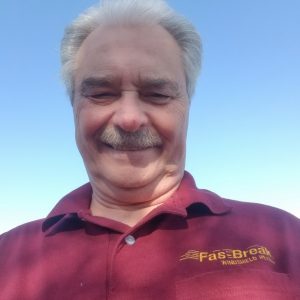 Kerry Soat in his Fas-Break shirt.

Soat was working as a volunteer voting adjudicator for the Maricopa County Election Board, located in Phoenix, where he said it was his job to make sure all votes for the Presidential Election were verified.

“We correct the ballots the machines kick out,” said Soat. “As a team of one Republican and one Democrat, we verify the voter’s intent on their ballot such as write in candidates, corrected votes, stray marks, etc.”

He mentioned that this was the only room that members of the press were allowed to film, as they were in the lobby of the building. “I was the grey-haired guy in the back and we got filmed a lot during that time,” said Soat, who was recognized by an employee in Colorado. “My Fas-Break operator Scott Vold texted me and said ‘Hey I just saw you on CNN, I can spot a Fas-Break shirt a mile away.’” Vold owns Cracks & Racks in Aspen, Colo., and is the Fast-Break location in the area, according to Soat. Vold has been with Fas-Break for about 25 years.

“I thought it was pretty cool – wearing the shirt was a good idea and I’d do it again,” he said.

According to Soat, there’s been additional traffic to his company’s social media pages since he was spotted. “I have noticed that my Fas-Break Facebook page has been hit more.” Though he mentions he hasn’t checked to see if his company’s site has had an increase in the amount of visitors, he remains hopeful that word about Fas-Break will spread.

Soat’s volunteer civic service brought extra benefits. What are some of the ways you’ve advertised for your company that was successful, feel free to leave your comments in the section below.

This entry was posted in glassBYTEs Original Story and tagged Fas-Break, Kerry Soat. Bookmark the permalink.