General Motors (GM) chairman and CEO, Mary Barra, gave the opening keynote address during CES 2021, where she shared a closer look at GM’s transformational strategy to advance mobility for communities around the world. This focused on an all-electric future and more auto glass.

“General Motors wants [the year] 2020 to be a call to action because while we are weary and while there is hope the battle isn’t over,” said Barra. “At General Motors our vision for the future is a world with zero crashes, zero emissions and zero congestion. The key to unlock that vision is electrification.”

“We believe we have the technology, the talent and the ambition to deliver on that commitment,” said Barra.

“The start of the EV era represents the most significant change in vehicle design since the 1920’s,” said Michael Simcoe, GM global design vice president.

Initial designs were meant to readily show that this particular vehicle model was an EV, now however the company admits it has drawn a line in the sand to bring new designs to the market, according to Simcoe. During his portion of the keynote, he showcased the company’s futuristic flying car drone concept and three new EV models based on a more efficient modular battery system called Ultium.

The flying car is a one-seater vehicle also known as an electric Vertical Take Off and Landing (eVTOL). It has four rotors, large amounts of glass and the ability to take off and land vertically.

“We are preparing for a world where advances in electric and autonomous technology make personal air travel possible,” said Simcoe. “It is a concept designed for the moment when time is of essence and convenience is everything.” 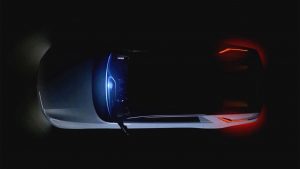 GM’s Cadillac Celestiq was introduced by Crystal Windham, Cadillac director of interior design. The vehicle’s front end looks almost fully illuminated, according to Windham, and has an electrochromic glass roof.

“The roof uses electricity to dim the glass covering nearly the entire roof,” said Windham. She also noted that the roof is split into four quadrants and are each capable of dimming to a different level. The Celestiq’s dashboard will have a pillar-to-pillar screen.

The automaker’s commitment to an EV future led to a change in power distribution. According to Mei Cai, GM technical fellow and lab manager, once you establish power for EVs you have to distribute it throughout the vehicle’s intelligence system.

“Driver assistance systems draw on the vehicle’s electrical bandwidth,” said Cai. “GM’s intelligence platform provides the software enabling layer that keeps everything working. It is a new innovative digital electrical architecture that provides more communications between the vehicle system and to the outside world.”

Look to a future edition of glassBYTEs to learn more about the company’s EVs and how they will be used to transport products and goods to businesses.