Auto Glass Week Preview Day held Tuesday January 12, gave attendees the opportunity to get a sneak peek of what to expect during the live show in June. During the event a COVID session dominated discussions, as a panel of auto glass experts discussed how their businesses were impacted by the coronavirus, some of the changes they implemented and what they see going forward for the industry. 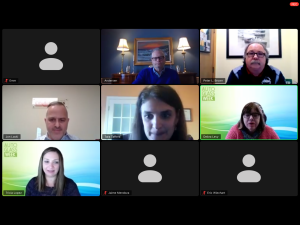 Taffera asked each of the panelists to describe how the past few months/year has been for their businesses while trying to navigate through COVID-19. Brown stated that the past six months were very challenging for his company and that Massachusetts was “very strict as far as the COVID rules,” which caused him to close his businesses for three weeks between the end of March and the middle of April. “We were able to reopen because we are an essential business and they called us to open because we do a lot of work for fire departments, police and a lot of fleet companies”, said Brown. “The hardest part of our business right now is the employee retention and everybody being positive about doing the touchless business aspect.”

Laski recalled his company’s experience during the start of the pandemic, and noted that there were concerns not only for the customers getting the virus, but also his associates. “They were challenging and sometimes scary times,” he said.

He noted that the company did start to pick back up in June, from what he said was a result of people getting restless and wanting to get back to living their lives again. “The summer was good, and we were tracking above our 2019 numbers for most of it and didn’t really experience the regular slowdown you see in the industry in September and October due to the fact that I don’t think many parents were sending their kids back to school. So our industry kind of rode the wave throughout the summer and we went through our holiday months which are typically slower,” said Andersen.

Although the panelists stated that they took precautions to keep their business, employees and customers safe, there were still COVID cases that hit close to home. Brown recalled a situation where one of his main technicians, who was a caregiver for his grandparents, came in contact with someone who had the virus. “That’s what caused our shutdown for 14 days because supposedly the contact situation wasn’t being addressed so I shut my business down to get everybody tested,” Brown recalled.

Two weeks went by before Brown learned that everyone tested negative for the virus and that he could reopen. That’s when his company put its contingency plan into effect. “We were doing our own little contact tracing and we’ve had a couple of scares over the summer and we’ve been able to pinpoint people and have that group quarantined,” he said.

Brown also mentioned that his company has had to become very diligent, as it used to have two people in every truck, but now two cars follow each other to have a safe zone. “The hardest part is the consumer part of it,” said Brown. “I can give them [auto glass technicians] all of the tools to take care of themselves, but some of the customers don’t believe in COVID-19. Overall I will never shut this business down again because it hurt me.”

Andersen shared his close experience dealing with COVID-19, as his father contracted it in his retirement community over the holidays. “We went through a couple of touchy weeks and he came through it and we’ve learned from that as a family. We’ve had several situations in our corporate stores, as well as at the franchise level where we have had employees test positive for COVID and we put the precautions in place,” Andersen explained. “There’s certain scenarios that have to happen.”

For example, if an employee comes in and says they have a family member who has COVID, specific steps get implemented. “Our protocol says the employee has to go and get tested to make sure that they’re negative and if they are negative, then they can come back to work at that point,” said Andersen. “But if the employee tests positive the next step is that everybody in the location has to get tested to determine if they’ve contracted it from being around that employee.”

He noted that the company’s franchise network works differently because some of the locations are owner operators and it’s tough for them – if they contract it to shut down their business for 14 days. According to Andersen, the company works with its franchisees at the local level to help with rescheduling and using another franchisee to help complete work.

Laski said that at City Auto Glass they had to think differently right away. “We had to go to a ‘no touch’ policy with our customers,” Laski explained. “Where we always obtain signatures from our customers we went to a process where we were utilizing email right away to authorize us to work on the vehicle to sign off on the vehicles and it was nice to have the customers so understanding of what we were doing.”

His company was able to purchase N95 masks early on and we were able to donate them to local hospitals in Florida and Minnesota, along with its staff, vendors and customers. “When the virus came it was a period of ebbs and flows, we went through periods of time where it hit almost 30% of our workforce or it was close to home,” recalled Laski. “It put our HR director into full force, working almost 24 hours a day keeping us updated on some of the new CDC guidelines. It made us think outside of the box and we’re continuously learning.”

Taffera asked the panelists how their customers responded to the touchless options and other company changes that were implemented during 2020. Andersen started off by stating that when the company was able to reopen the expectation was already set for how customers were to do business.

“We didn’t really get a lot of consumer pushback,” Andersen said. “We did a lot of touchless aspects and a lot of customers appreciated the fact that we took those measures. The one area that we did get pushback was when we forgot to do our thing. Like maybe when a technician went out and maybe didn’t have their masks on and a customer would call us and let us know about it.”

According to Laski, the customers were more forgiving when it came to masks being worn during all jobs. “We only wanted to keep our customers safe and we didn’t want to be the mask bully but it was helpful to have the surveys tell us when our techs weren’t always wearing them,” he said.

Brown mentioned that not all of his customers wore masks when his mobile technicians went on location for jobs. He was proactive and supplied all of his company’s trucks with foggers and packages of masks to ensure his employees and customers were safe.

“Overall 99% of the time our customers have been unbelievable, we’re all in the same boat and we all try to work together,” said Brown. “For a small company like us we changed the way we did our appointments, we’ve spun around and changed on the fly so now everything is done by email, phone or text and it’s excellent.”

“I think it’s the new norm for at least the next year or so because I don’t think these types of protocols are going to stop anytime soon,” said Andersen. “I see all of 2021 still in the same protocol I think we’re going to be with all of these precautions.”

Brown also thinks that certain precautions will remain in place throughout 2021. “There could be something different next year that could be coming our way the touchless aspect of dealing with customers is probably going to continue for the next couple of years, and we’re trying to stay positive and happy,” he said.

“I see this not going away, because it’s also a way to keep sickness down overall,” added Laski.