City Auto Glass (CAG) has a strong reputation spanning across several states, including Minnesota, western Wisconsin, northern Iowa, and most recently, mobile locations in central and southern Florida. Two of the company’s representatives share insight on future company expansion, mobile calibrations and more. CAG opened in the Orlando territory and the South Florida market in January 2020.

Company representative Chris Navarro said Florida was a good pick for several reasons, including the fact that its home to both himself and the company’s CEO, Jon Laski.

“Florida is a busy market that’s for sure and it’s a zero deductible state, so it’s a good state to be in,” said Navarro. “Seeing that we both live in Florida and have worked for the [auto] glass industry for so many years it only made sense for us to open up locations in our home state.” 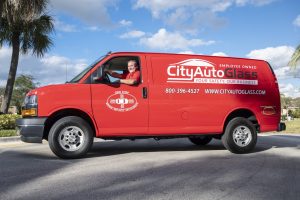 CAG currently services two markets, the Orlando territory and the South Florida market, which includes Palm Beach County. Laski says the Florida locations opened in January of 2020. “It’s slow work but we’re gaining market share and our technicians are all experienced and we’ve been getting a lot of referral work,” said Laski.

But the company is looking to capitalize on more of the sunshine state. Laski mentioned that a lot of people from the Northeast choose to retire on the east side of Florida, while on the west coast of Florida, you’re more prone to seeing a lot of people from the Midwest retire there. CAG looks to expand in the Fort Meyers and Tampa regions this year.

“Right now we’re only mobile, but we look to open up a brick-and-mortar location at the end of the second or third quarter 2021,” explained Navarro. “Being that business is different in Florida because of weather, you’re not as impeded by bad weather that often, as rain comes and 30 minutes later there could be sunshine.”

Mobile auto glass repair and replacement aren’t the only services being offered, as it currently uses different local partners to perform calibrations. “Sometimes you need to have a work environment inside for your static calibrations, so we work with a few different paid partners, plus we have a trailer that we’re testing,” said Navarro. 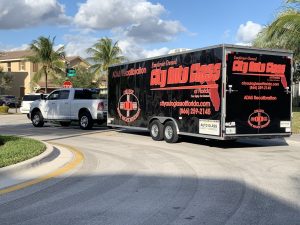 The calibration trailer is not used for all calibrations, but CAG utilizes this option since it currently doesn’t have a brick and mortar location. The goal is to become a one-stop shop and follow the blueprint of the company’s other locations, which has been successful, according to Laski. He said CAG – Florida has doubled its workforce and has gone from four to eight employees.

“We definitely want to grow in market share, moving west is a number one priority now then we’ll move west,” said Navarro. “We look to cover all of Florida.”

“We also look to quadruple the workforce, right now we have eight technicians and we would like to see that workforce get to the 30 technician range throughout the state within the next five years,” said Laski. “We’re happy to take the torch and bring it to Florida. Because of COVID we’ve had to slow it down a little bit, but it hasn’t taken us off track. We’re focused on keeping our customers safe.”