Setting devices and wire cut-out tools are often touted as devices that make installations safer for technicians but are they actually delivering on the promise? The possibility of an auto glass technician getting hurt on the job is not a question of if but when and how bad. 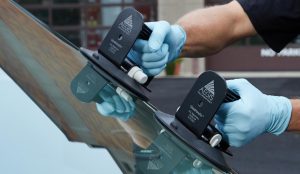 An extensive article on this topic was published in the January/February issue of AGRR magazine. The full article may be found here.

But, AGRR also uncovered some additional information not featured in that original article. In addition to the coming storm of calibration equipment, some glass experts see the adoption of setting devices and the use of wire cut-out tools as pivot points for the industry.

“It’s a tug-of-war between the people driving the industry to make things safer and the people who don’t want to learn the new techniques and drag the industry down,” says Macenzie Curbow, branch manager for Novus Glass in Kennewick, Wash.

Tools that help leverage brute strength can also change the complexion of the techs doing the work. “The new setting tools and wire tools open our industry up to more women being part of the workforce,” adds Bob Beranek, president, Auto Glass Consultants based in Sun Prairie, Wisc.

In addition to the hardware, the positive effects of education can’t be discounted when it comes to working safer. “With the new generation coming out there are training options that go beyond the guy sitting next to you in the truck. With tool availability offered to people, they’re eventually going to learn it’s for their well-being, it’s for their customer’s well-being, it’s for your longevity in the career, it’s in your best interest to use them,” says Beranek.

Scott Sowers is a contributing writer for AGRR magazine.