Postal Vehicles Get Glassy Thanks to Multi-Billion Dollar Contract

The U.S. Postal Service (USPS) announced it awarded a 10-year contract to Oshkosh, Wis., based Oshkosh Defense, to manufacture a new generation of U.S.-built postal delivery vehicles that will incorporate more auto glass. The investment is a part of a plan the Postal Service developed to transform its financial performance and customer service over the next decade through investments in people, technology and infrastructure as it seeks to become the preferred delivery service provider for the American public, according to the USPS. 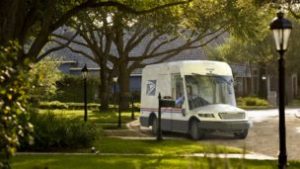 Under the contract’s initial $482 million investment, Oshkosh Defense will finalize the production design of the Next Generation Delivery Vehicle (NGDV) and will assemble 50,000 to 165,000 of them over 10 years. The vehicles will be equipped with either fuel-efficient internal combustion engines or battery electric powertrains and can be retrofitted to keep pace with advances in electric vehicle technologies.

Nir Kahn, design director for custom vehicle manufacturer Plasan, spoke about the new design and constraints on Twitter, explaining how the new windshield shape was inevitable.

“The requirements dictated the step-in height, the glass height (including the low side glass), the vision angles, the internal height, and the maximum roof height,” wrote Kahn in a tweet.

According to Kahn, the ability to reach the mailbox while in the seated position and the requirement to see the ground around the vehicle were examples of constraints. The seating position went hand-in-hand with the glass height and vision angles and seemingly caused a near-fixed position in the hip-point height of the driver’s seat. The requirement to see the ground also contributed to the sharp falloff of the vehicle’s nose and factored into the sloping lower corners of the windshield, all despite the dashboard being in the way, according to Kahn.

The contract is the first part the effort to replace the Postal Service’s delivery vehicle fleet. The USPS fleet has more than 230,000 vehicles in every class, including both purpose-built and commercial-off-the-shelf (COTS) vehicles, according to the company. Approximately 190,000 deliver mail six days a week. The first NGDVs are estimated to appear on carrier routes in 2023.

“As the American institution that binds our country together, the U.S. Postal Service can have a bright and modern future if we make investments today that position us for excellence tomorrow,” said Postmaster General and USPS CEO, Louis DeJoy. “The NGDV program expands our capacity for handling more package volume and supports our carriers with cleaner and more efficient technologies, more amenities, and greater comfort and security as they deliver every day on behalf of the American people.”