Webinar Gives an Inside Look into Crash Testing

Rea began the Crash Testing in the Auto Glass Replacement (AGR) Industry webinar by explaining the importance of crash testing. He said that both crash testing and MDAT play critical roles in ensuring vehicle occupant safety in the event of a crash. “Crash testing and MDAT are vital to … ensure customer safety by providing the safest adhesive system available,” said Rea.

How MDAT and Calibration Relate 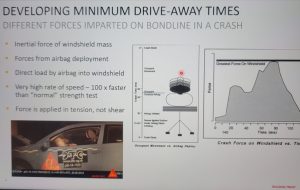 Rea also explained that MDATs can vary at different environmental conditions. He said the cure speed of all one-component polyurethanes is dependent on temperature and humidity. This can be seen through warmer car air, which has the ability to hold more moisture when compared to colder air. Rea said it’s important to note that reaction speed is faster when in high heat and humidity and is slower when in cooler and less humid conditions.

Rea said his company has performed more than 70 crash tests worldwide since 1987 and has invested more than $2 million to validate MDATs of its products. But not just any vehicle can be used in crash testing, according to Rea. A few key features in the vehicle selection for crash testing include: