Auto Windscreens celebrated its 50th anniversary on May 20, 2021. It was established in 1971 as a family business in Chesterfield, Derbyshire, United Kingdom, where its head office is still based today. 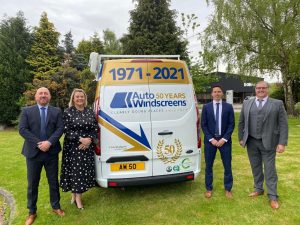 When the company first opened its doors, the best-selling cars on the road were the Ford Cortina, Ford Escort and Mini. George Harrison’s number one single “My Sweet Lord” could most likely be heard blasting from those lucky enough to have a car radio.

The company has launched a special logo and five ‘golden anniversary’ vans which will be presented to a chosen technician in each region and at the head office.

James MaCbeth, Auto Windscreen’s Managing Director, has been with the company for nearly three decades.

“I’m so proud to have worked my way up from starting at Auto Windscreens as a trainee technician in 1992, and to be standing here now, leading the company into its 50th year,” MaCbeth said.

“What an amazing achievement for what began as a small family business to become a force to be reckoned with in the industry,” MaCbeth said. “Our success is purely down to the hard work, passion and dedication of all our colleagues, past and present, and I’d like to take this opportunity to thank them all. Auto Windscreens is truly the best company to be a part of and I’m excited for the future. Here’s to the next 50 years!”

The company says it is planning to continue its expansion, having already employed 26 new technicians, 21 apprentices and 12 handlers in its contact center this year. It aims to add another 10 Service Centers to the network and recruit up to 30 technicians by the end of 2021.

This entry was posted in glassBYTEs Headlines and tagged Auto Windscreens, United Kingdom. Bookmark the permalink.